We do not know an awful lot about Microsoft's upcoming operating system Windows 8. Heck, we do not even know if it will be named Windows 8 (Update: it was named Windows 8 after all).

Microsoft is tight lipped and does not reveal planned features at this point in time, probably to avoid jeopardizing the sales of their current operating system Windows 7.

The official information we have are mostly from job postings and patent applications at this point time.

Back in August I ran a story about Direct Experience Mode based on a patent application by Microsoft and the rumor that it could be integrated into Microsoft's soon to be released Windows 8 operating system.

The patent application mentioned an option to load different versions of the operating system automatically or manually. An example was given: a user inserting a video DVD into the computer before boot would notice that the device would load a faster loading video player interface only instead of the full operating system.

A new patent application was filed in January 2011 which looks like a detailed version of the previous application.

The operating system is not loaded directly anymore. Instead, a virtual machine manager is started which can load one of the available partitions. Partitions in this case means either a general purpose operating system or a specialized version. It should not be confused with hard drive partitions.

The figure above shows one general purpose operating system and four specialized systems for DVD, TV, Music and Other purposes. It is likely that other is just a placeholder for multiple applications. It could for instance be interesting to load a web browser directly which could target Google's Chrome OS.

While it is currently not known if the technology behind the patent will find its way into the Windows 8 operating system, it is likely that it will in form of the Direct Experience Mode.

According to the patent, it is possible to load a second operating system to switch between systems whenever the need arises. Windows 8 could start up with a web browser or email client and load the general purpose operating system in full in the background.

Several questions remain unanswered at this point in time:

What's your take on the Direct Experience Mode? 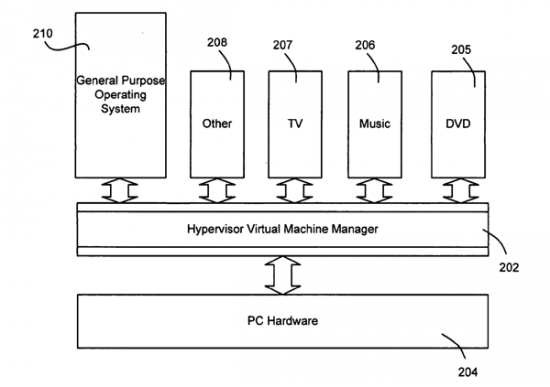 Previous Post: « Recover Videos With Get My Videos Back
Next Post: « VSO Inspector, CD, DVD And Blu-Ray Hardware Information Tool