Bye Tunes has been designed as a last resort for Windows users who want to remove the Apple iTunes software completely from their PC. The main use are situations where the normal uninstallation or removal of iTunes is corrupted so that the software cannot be removed completely from the system. It can obviously also be used to remove iTunes even if the standard uninstaller is still working, but that is not really recommended. What you can do however is run the program after the normal uninstallation just to make sure that every last bit of data has been removed from your system.

The program displays some legal mumbo jumbo at startup, basically stating that the developer cannot be held responsible for any damages on the system. The program kills the explorer.exe process and displays a progress window afterwards that displays progress information of the removal. 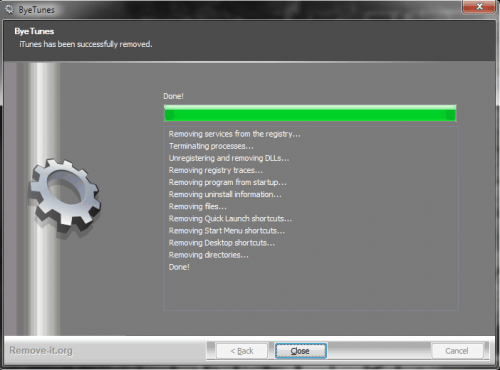 The program will remove all traces of iTunes with the exception of Quicktime from the computer system. Included in the removal are the Bonjour services, other iTunes related services, Registry keys, startup programs, files, shortcuts and directories.

Bye iTunes has been last updated in 2007. It seems however that it still works without causing troubles or problems on the computer system it is executed on.

Update: It is no longer recommended to use Bye iTunes, the core reason for that being that the last update of the program dates back to 2007. It is likely that the program will not be able to pick up new files, folders or Registry entries that newer versions of iTunes have added on a computer system during installation.

Probably one of the best alternatives is a uninstaller like Revo Uninstaller, which will find leftovers after the installation so that they can be removed as well.

Update 2: Please note that the last version of the program dates back to 2007 which is an indicator that it may not work with more recent versions of Apple's iTunes software. I'd suggest to use Revo Uninstaller instead as it is the safer option.

Update 3: As one reader pointed out, you can use CopyTrans Drivers Installer to remove iTunes from the system, but only if it is still installed or at least listed as installed. The name should not confuse you, as the removal of iTunes is not the program's first purpose. It installs iOS drivers for devices on your system so that you do not need iTunes installed on it to manage them on it.

Since it cannot install the drivers with iTunes installed, it offers to remove Apple's software first from it. You can select to uninstall the following components from your PC:

There is no way of making a choice here, which means that all components will be removed from your system if you click on the uninstall button.