Bitlocker To Go is a program for Windows XP and Windows Vista that allows you to mount FAT Bitlocker volumes in read-only mode.

Bitlocker on Windows 7 and Windows Server 2008 R2 was improved, as Microsoft added options to encrypt removable storage devices using Bitlocker. While that is a welcome new option, as you can use the feature to encrypt USB Flash Drives for instance, it can become an issue depending on your work situation as you need a device running Windows 7 or Windows Server 2008 R2, or later, to decrypt the data.

Microsoft has therefore created a solution for this issue called Bitlocker to go Reader. It enables you to access Bitlocker encrypted data on devices that don't support Bitlocker at all, or not the new functionality of Bitlocker introduced in Windows 7.

Microsoft's solution is the Bitlocker To Go Reader; a software program compatible with Windows XP, Windows Vista and newer versions of Windows that can be used to decrypt the data on a Bitlocker encrypted removable storage device, and make it read-only (hence the reader in the application's title). 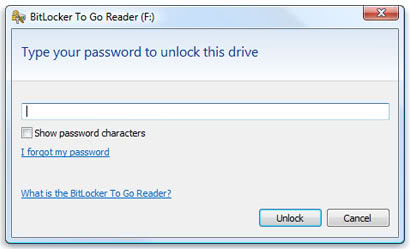 A right-click on the device and the selection of autoplay, or a double-click on the drive icon in Windows are the other options to display the Bitlocker To Go Reader window.

The BitLocker To Go Reader is an application that provides users read-only access to BitLocker-protected FAT-formatted drives on computers running Windows XP or Windows Vista.

You need to enter the password the data was encrypted with to decrypt it, and access it on the computer you are using.

An alternative to encrypt file systems, removable storage devices and other data is the open source software True Crypt which we have reviewed in the past. True Crypt offers the advantage of encrypting and decrypting data not only on Windows machines, but also Linux and Mac OS.