This will by default send the screen or the window to the default printer in Windows. The settings of the program can be used to change that behavior in many ways. It is for instance possible to change the default behavior to copying or saving the screen, window or a rectangle among other options.

That's however not the only way to access the additional features that Hardcopy offers. Hardcopy places a printer icon on every window title which when pressed will also initiate the configured action. Three different actions can be configured that are triggered by pressing the left, middle and right mouse button. 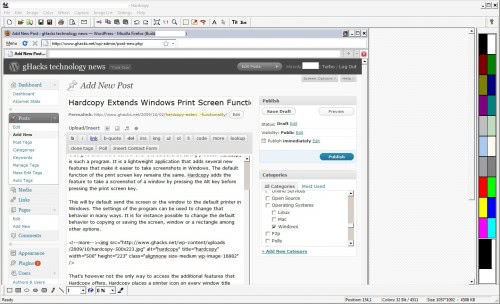 The main window of Hardcopy offers basic image editing options which can be useful to quickly edit the screenshot before publishing or sending it.

Hardcopy is available for all Windows operating systems at the developer's website.