New software uninstallers have to not only compete with the default Windows uninstallation module but also with advanced uninstallers like Revo Uninstaller which not only uninstall the software but also scan and clean up leftovers that have been missed by the standard uninstallation. KUninstall is a portable software program that offers a similar functionality as Revo Uninstaller does. It will display the installed software programs almost instantly in its interface. The number of programs listed is higher than that of the standard Windows add and remove programs control panel module. Each program in the list is shown with its product name, version, publisher, install location, date, uninstall string and addition information like the company's website.

A filter on tab can be used to quickly find the desired program in the list. There is also a finder icon which can be dragged onto any open window to uninstall the program or kill the process of it in Windows. 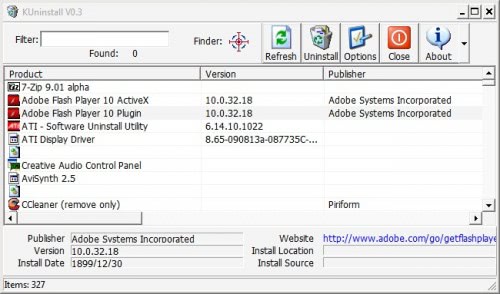 Programs can be uninstalled by right-clicking on them and selecting the uninstall option from the menu. Another option is the uninstall icon in the top menu which is always accessible. A small menu is displayed afterwards giving the user the option to uninstall the program (this will trigger the default uninstaller) and to scan for leftovers.

KUninstall works faster and more reliable than the default Windows uninstaller. It does however lack several features at this stage in development that make Revo Uninstaller superior. It is for example not possible to select multiple programs for uninstallation (which would be executed one after the other). There are also no filters to hide Windows updates from the product list. The scan for leftovers is very fast which could mean that it is not as thorough as the one offered by Revo Uninstaller.

KUninstall is compatible with most Microsoft Windows operating systems (but apparently only 32-bit editions). It can be downloaded from the developer's website.