The Firefox development team made the decision to switch to SQlite databases for data storage in Firefox 3.

While the move worked without issues for the most part, some users of the browser noticed that the size of the browser's profile folder increased significantly over time.

There was no option to optimize the SQlite database regularly, something that is called vacuuming, which resulted in the database file growing bigger and bigger.Back when Firefox 3 came out first we published a solution for the issue (read: optimize sqlite databases in Firefox) which involved running a batch file in the Firefox profile directory to optimize databases and reduce the overall size of the Firefox profile folder.
The process can best be described as defragmenting the database to close gaps that contain no data which in turn frees up disk space.

The Firefox add-on Vacuum Places improves this process by providing options to run database optimizations right from within Firefox.

The experimental add-on optimizes SQLite databases of the active Firefox profile whenever its button in the Firefox status bar is clicked on.

The database size reduction depends largely on the amount of data in the database, the time it has been in use and the last cleanup. A run on a test system (using the batch file) reduced the size of the profile folder from 64.8 Megabytes to 53.4 Megabytes.

Vacuum Places can be downloaded from the official Mozilla Firefox website. It is advised to create a backup of the Firefox profile folder before running it for the first time.

Update: Vacuum Places is not compatible with recent versions of the Firefox web browser. We suggest you use an alternative instead. One extension that you may want to try is Places Maintenance. 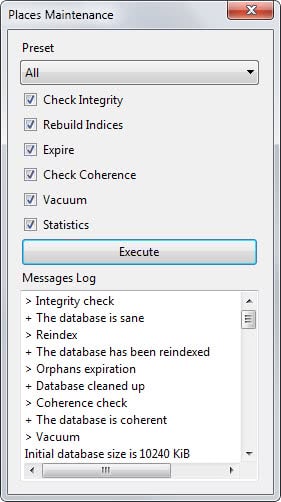 It works similar for the most part but offers several additional options that you may find interesting. This includes stats generation for example so that you know what it did in detail.