It's All Text is an interesting add-on for the Firefox web browser that enables Firefox users to fill out web forms in an external text editor instead of the form on the site itself.

External text editors have many advantages over the build in way of adding text to web forms in Internet browsers. They usually provide a deeper functionality that may include text macros, additional text manipulation options and customizable interfaces.

The Firefox add-on has been primarily designed as a text backup option if the sending of text using web forms fails.

This core functionality has changed since Firefox began to save browser sessions every fifteen seconds.

It's All Text offers an option now to add or edit text of web forms more comfortably in a known environment using a local text editor supporting the text type.

The Firefox extension displays an edit button automatically in the lower right corner of every text form on websites. A click on the edit button launches the external text editor which can then be used to write the text. 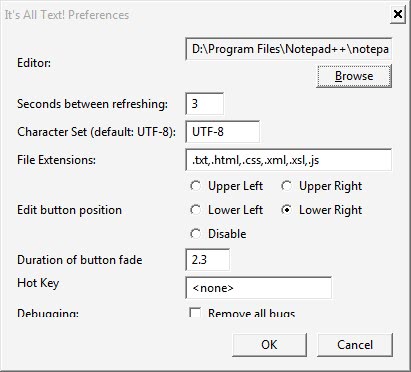 The default text editor has to be selected at first use. A few other options are available in the add-on's settings including moving the edit button to a different location, the character set or defining a hotkey for the process which opens the editor when activated.

It's all text is available for Firefox 3.x at the Mozilla Firefox website.

no rating based on 0 votes
Software Name
It's All Text!
Landing Page
https://addons.mozilla.org/firefox/addon/its-all-text/
Advertisement

Martin Brinkmann is a journalist from Germany who founded Ghacks Technology News Back in 2005. He is passionate about all things tech and knows the Internet and computers like the back of his hand. You can follow Martin on Facebook or Twitter
View all posts by Martin Brinkmann →
Previous Post: « Optimize Firefox Databases With Vacuum Places
Next Post: Fix Firefox Spell Check Not Working »