Live PCs can be added easily to the application. The labs section on the MokaFive website lists dozens of potential Live PCs ranging from various MS-DOS versions, Linux distributions to gaming systems and applications. One of the most popular Live PCs is the Fearless browser which is a hardened browsing suite that provides anonymization and security. 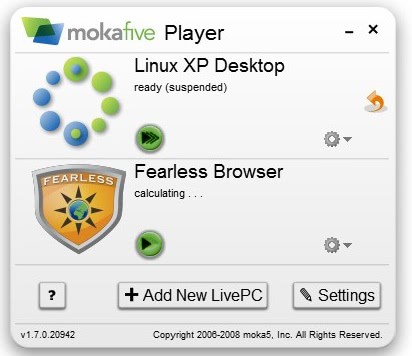 The core benefit of running the MokaFive Player is that it is dead easy to use. All it takes is to either start one of the Live PCs that ship with the product or download an additional Live PC from the website. It does not take more than a few clicks to work with a virtual PC system.

The system virtualization software adds a few new features to VMWare Player including:

MokaFive Player is an excellent easy to use system virtualizations solution.