iPhones: they aren't as bad as you think - gHacks Tech News
ghacks.net

iPhones: they aren't as bad as you think

A couple of months ago, I did something I thought I never would do: I bought an iPhone. Technology enthusiasts generally seem pretty torn about these devices: some see them as fantastic whilst others see them as an expensive device which isn't very functional.

I, too, was torn. I vowed never to buy an iPhone, on account of their price and lack of certain features (saying that, I too vowed never to run Windows XP but I ended up using XP about 3 years after its release, in 2004). I was strongly considering a Symbian-based smartphone, generally seen as a phone of someone a little more tech-savvy than an iPhone user. When I got my iPhone, I was shocked. iPhones are actually very good.

Whilst they do have many little annoying flaws, such as the fact you can't use a landscape keyboard to compose an email or SMS (not until the next version of iPhone OS, anyway), they are remarkably user-friendly and after a little jailbreaking pretty flexible. I have yet to find something I would like to do, but I can't do. 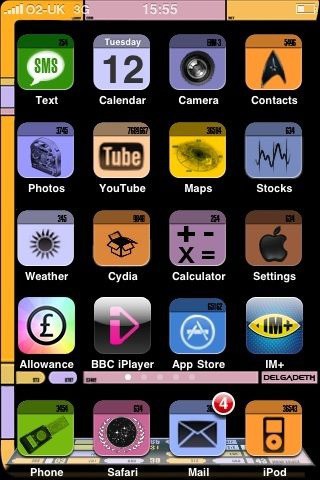 I found the selection of applications, in the App Store and other unofficial places, absolutely amazing. I have many games - ranging from a mobile version of Sim City to an NES emulator - and I also have many tools and utilities, like a Google Docs editor, SSH terminal and SSH server. My only complaint with applications is how quickly you end up spending a small fortune in App Store: I still find it amazing I have to pay £5 for the official UK train network's program.

Another popular complaint people have with the iPhone is the lack of hardware keys. However, I soon became accustomed to the touch screen, because it has somewhat of a LCARS feeling - especially after you install a LCARS theme! There are some hardware keys though: volume control, a switch to turn it on or off silent mode, the 'home button' and a lock button.

Still, the most popular complaint is the price. I find myself paying 35GBP a month and about a 100GBP lump sum. For that, 600 minutes and 500 texts. Pretty expensive, but I am quite satisfied with the data plan that is also included in that price.

Article Name
iPhones: they aren’t as bad as you think
Description
Joe explains why he decided to buy an Apple iPhone after all, despite being torn about it for a long time, and why he does not regret the decision.
Author
Joe
Publisher
Ghacks Technology News
Logo