Customize Google has been a very popular add-on for the Firefox web browser for some time now. It allows you to customize many aspects of your interaction with Google services like Google Search or Gmail. 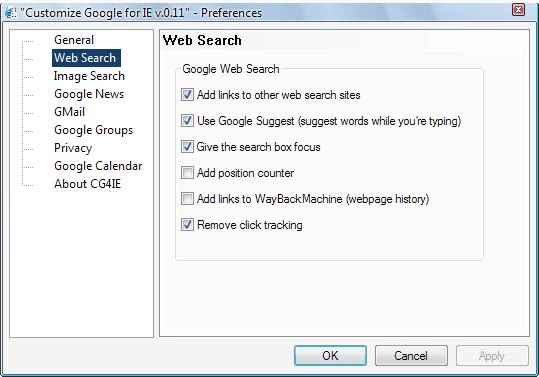 Customize Google for Internet Explorer is a similar add-on for Microsoft's web browser. The current set of options is not as vast as those in its Firefox counterpart though which can largely be attributed to the early build number of the add-on.

The Internet Explorer add-on can be started from the Windows start menu after installation. It will display a configuration menu with options to start and stop the Customize Google add-on for Internet Explorer.

Google services and settings are divided into categories in a sidebar. The most popular Google services like web search, Google news or Google Mail are already included in the list. A click on any entry will display the configuration options for it in the right window.

Check boxes define if an option is enabled in Internet Explorer. Security conscious users may want to disable click tracking and Google cookies that can track user behavior while using any of the Google services.

The Internet Explorer add-on does not feel feature complete at his point in time when compared to the Firefox add-on of the same name. It does however provide the security and privacy options that many users seek which should be enough reason to give it a try.

Customize Google for Internet Explorer is a handy extension for IE that gives you better privacy and security options for your Google interactions.

Update: The customize Google for Internet Explorer is no longer available on the Internet. We are not aware of any comparable extension for the web browser at this point in time.

We have uploaded the most recent version of the plugin for Internet Explorer, released in 2006, to our server. Please note that some of the functionality that it makes available may not work anymore. It can also be that it is not compatible with newer versions of Microsoft's Internet Explorer. If you want to give it a try, download the most recent version from this link: cg4ie_setup.zip

Note that we do not support the program in any way.