There are quite a few possibilities to take the Linux distribution Ubuntu for a test drive.

It can be run from Live CDs, run in a virtual machine or installed on a free partition on the computer system even from within Windows (using Wubi).Â  Another possibility is to run Ubuntu in a virtual environment using software such as Oracle's VirtualBox for that.

Portable Ubuntu adds another possibility to these choices by offering to run Ubuntu directly in Windows without installation or configuration at all.

The Linux distribution can be downloaded directly from its Sourceforge page. It comes as a 1.5 Gigabyte executable file that self-extracts its contents to the local system.

Users can then immediately start Ubuntu in Windows by clicking on the run_portable_ubuntu.bat file that is located in the root directory of the software program. Starting portable Ubuntu in Windows will open a command line window which will remain open all the time. This command line window contains information about background processes and the state of the Ubuntu system.

The Ubuntu dock at the top center of the screen is loaded eventually, and users may use it to access applications, places, system features and more from it.

Talking about applications. The usual add / remove applications menu can be accessed in portable Ubuntu to install additional applications on the computer system.

One could think that running an operating system inside another operating system would surely demand lots of system resources. This is surprisingly not the case. Running the first version of Ubuntu portable requires less than 50 Megabytes of computer memory that are occupied by its processes.

Main question however is why someone would use Ubuntu portable instead of the other options outlined above. One of the main reasons is that it is the least complicated to use. It cannot get easier than extracting and running the Linux distribution. Even Live CDs might require changing the boot sequence from hard drive to CD in order to run the distribution that way.

The portable application provides access to many Ubuntu applications and features, which can be a great way of taking a look at the options the distribution offers.

It comes close to the Linux user experience but does not provide it fully. There is still the Windows Taskbar, icons and wallpapers that make the system look much more like a Windows system than a Linux system. Interested users can download it right at the developer's website at Sourceforge.

I prefer to use virtualization instead, as it separates both operating systems clearly. If you cannot or don't want to install virtualization software, and setup Ubuntu Linux, then Portable Ubuntu Remix is without doubt the most comfortable option that you have.

Update: Portable Ubuntu Remix development stopped in September 2011 when the last version of the distribution was released. While you may still be able to run the program, it is suggested that you use virtualization instead to run Ubuntu alongside Microsoft Windows. 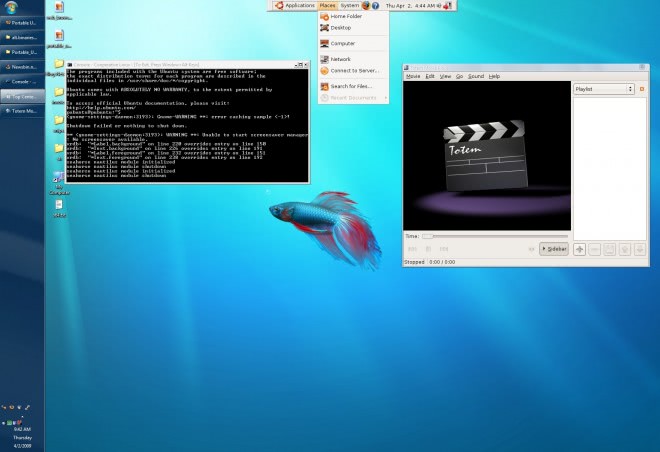 Previous Post: « Help, I Use Ubuntu and There's No "su"!
Next Post: « Which Ubuntu Derivative Is Right For You?