Making sure that an application is running 24/7 on a computer system is not as easy as it sounds especially if that application does not have a restart option when it crashes.

I suppose the usual suspects have their Auto IT or Auto Hotkey applications running in the background that monitor applications on their computer network to restart them if necessary. The average user usually does not have those resources at hand though and needs a simpler easier solution instead.

The software Application Monitor can come in handy for users who run servers of any kind on their computer or who like to download files when they are sleeping or not near the computer. Nothing's worse than to wake up and realize that the application that controlled the download crashed ten minutes after going to bed.

Well, there are worse things but this one can be really frustrating as well.

Application Monitor will monitor applications added by the user using selected intervals. If the software program notices that an application is not running anymore - because of a crash, program termination or other reasons - it will restart it automatically.

All that needs to be done to monitor a new application is to enter a name and point the Application Monitor to the application's path. It is possible to add arguments that will be executed when the program starts and to change the interval from 2 minutes to a different one. 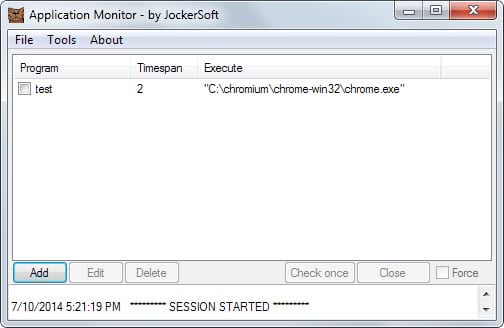 The system administrator can be notified by email regularly and all events will be logged on the system's hard drive by default.

Application Monitor is a portable software that requires the Microsoft .net Framework 1.1 to run.

Update: Application Monitor has not been updated in a long time. The program is still listed on the developer website though. A test under Windows 7 confirmed however that it is running fine under the new operating system. The project seems to have been abandoned though.