Fourth day of the Ghacks Christmas Giveaway. We already handed out Kaspersky Internet Security 2009, Newsbin Pro, Giganews Accounts and MediaMonkey Gold licenses. Today's giveaway is Display Fusion Pro, one of the better, if not the best, multi-monitor desktop wallpaper and window management applications.

The main feature of Display Fusion is to display wallpapers on multiple desktops. The user may display different wallpapers on each desktop or use one wallpaper that spans across all of them. Each computer monitor connected to the computer system is displayed in Display Fusion's main interface.

The user can load wallpapers from his computer or Flickr and make them the default wallpaper for the computer monitor. Display Fusion Pro provides access to background image positioning which can be used to fine tune the location of the wallpaper on the monitor. It's also possible to use one of the seven display modes that range from stretching the image to fitting the width or height while maintaining the aspect ratio of the image. 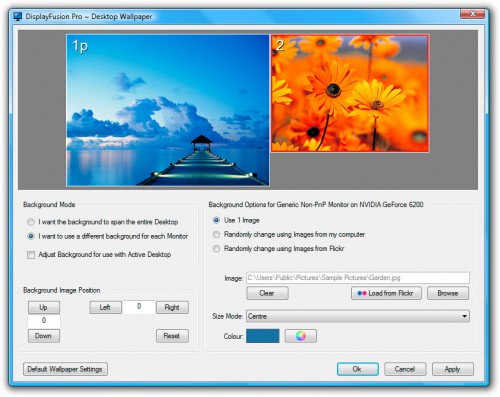 Users of Display Fusion Pro can enable wallpaper rotation in the same interface. They can either add a list of wallpapers from their computer or get their wallpapers directly from Flickr. 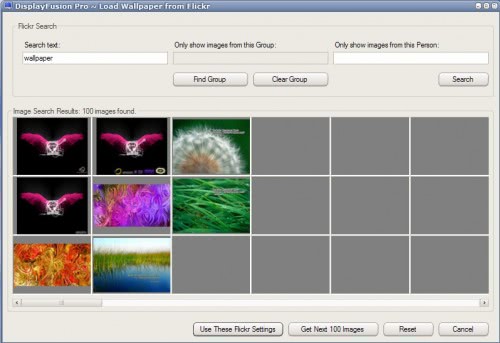 Images can be grabbed from Flickr users, groups or by searching for text. The wallpapers set will then be used to rotate the computer's wallpaper in a time interval specified by the user. One interesting option is to freeze a wallpaper. This will stop the process of rotating wallpapers and make the current one the default wallpaper.

Display Fusion comes with window management features as well which have been specifically designed for multi-monitor systems. Windows can be easily moved between computer monitors including maximized windows. It is furthermore possible to position windows on the same computer monitor. It is for instance possible to center a window on the current monitor or to snap it to one of the monitor's edges.

One main benefit of Display Fusion Pro is the ability to configure custom window sizing and moving hotkeys. Other interesting features include Window Snapping with the option to exclude applications from it or maximized window dragging between computer monitors.

The newest Beta of Display Fusion Pro enabled another long requested feature to the application. Users can enable a taskbar on every computer monitor. The feature is still beta but it already provides two possibilities for users. The first is to display a Display Fusion Taskbar on additional monitors that is showing all windows like the taskbar on the main computer monitor. The second option is to only display the windows that are open on each monitor.

Jon Tackabury is regularly updating his website Binary Fortress with new information about Display Fusion and other software projects.

Five licenses for Display Fusion Pro are up for grabs. Just reply in the comments and let us know that you want one.