Creating regular backups of important data is an important task that should not be skipped unless you are prepared to setup they computer system anew and still loose important data like emails, office documents or photos.

We covered Windows backup software before at Ghacks but never before a portable software that could backup partitions and hard drives.

ODIN, which stands for Open Disk Imager, is a portable Open-Source backup software that can backup partitions and hard drives with the exception of the system partition. It is currently available in a very early beta which should not be used in a productive environment.

The hard drive backup software can be used to backup or restore data and is very easy to use. Backing up data basically involves picking a drive letter or physical drive, selecting a location to store the hard drive image, and optionally changing a few parameters before you hit the start button. 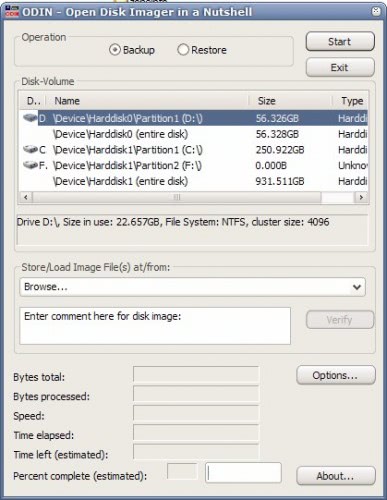 The options provide access to a few interesting settings like turning on gzip or bzzip2 compression, splitting data into chunks or saving only used or all blocks of the partition or physical drive.

Restoring an image is as straightforward and easy. You need to pick the partition or physical drive and select the image that you want to restore on it.

The drive backup software has a few limitations which probably will be removed in later builds of the software. The inability to create a backup of the system partition is probably the biggest.

Odin can be run from a graphical user interface or the command line. If you prefer the command line, use the -usage parameter to get a list of all supported options and functions. It can be useful to run automated backup from scripts for instance.

The software supports all recent versions of the Microsoft Windows operating system. It has not been updated since 2009, which is a strong indicator that it has been put on ice by the development team. The latest version is a beta release.