Personal Backup is definitely not the most comfortable Windows backup software but it does have a few aces up its sleeve that might make it interesting enough for users who are looking for a specialized backup software. The software comes in an English and German version and is compatible to all Microsoft Windows operating systems from Windows 98 to Windows Vista.

The interface seems to have received its last lift in the last century which would not be that of a problem if there would not be so many buttons and menus available. It takes a while to get used to the interface but once that has been achieved users will reap the benefits of the backup software.

Personal Backup supports the creation of backups on local and network hard drives as well as ftp servers using ftp and sftp connections. The first ace that is actually a pretty handy feature is the creation of several so called auto backups which can be configured independently of each other. That comes in handy with the excellent filtering options of Personal Backup.

As soon as a folder or partition gets added to the backup list it is scanned and a list of all file types, their count and total sizes are displayed next to the usual information like directories and many options.

The listing of file types makes it pretty comfortable to pick certain file types that should be backed up on all hard drives and schedule those backups next to other backups. One scenario would be to backup all .doc, .xls and other document formats on all drives regularly which is just a few clicks away in Personal Backup. 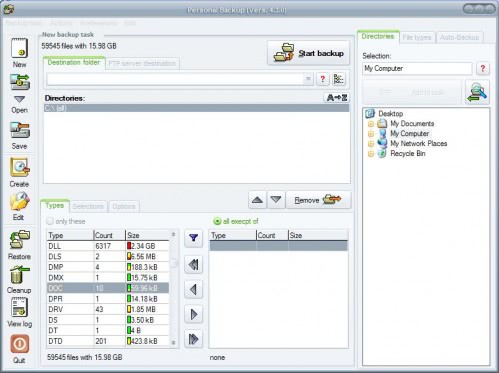 The filtering options of this Windows backup software are immense. Filters can be set to match filenames, file attributes, file sizes, time and regular expressions. The preview button can be used to check on the files that would be backed up by Personal Backup which can be used for verification.

The options that define the output are as extensive as the filtering options. Some of the backup options include:

The Windows backup software contains so many options that it will really take a while before everything has been discovered. Most of the options are not needed to perform a simple backup but Personal Backup is more a software for users who want to make exact backups on their system, who want to point at the exact data and backup that data.

Backups can be scheduled multiple ways which range from daily to weekly backups. It is also possible to combine backup methods during the scheduled backups, for instance to create multiple backups for data safety purposes.