There are several reasons why someone would want to change the language of the Windows Vista installation. Could be that a laptop or computer was bought in another country that came with a different language than the native language, or that someone went to a new country for a job or study and that working with the country's language would speed up work.

Update: Please note that the tool is no longer available. We suggest you download Vistalizator instead which supports changing the language in all recent versions of Windows Vista and Windows 7 as well. It supports all 36 MUI languages, 55 Windows Vista LIP languages and 59 Windows 7 LIP languages.

It takes less than 5 minutes usually to change the display language in Windows using the program, provided that the program's Express setup mode is being used. There is also a custom mode if you prefer that which gives you more options and greater control over the process. End

The Windows Vista Multi-language User Interface Hacker is a third party software that was specifically designed for the purpose of changing the language of a Windows Vista operating system. It works by downloading the program files and the selected MUI language pack from Microsoft.

It converts the language afterwards in a lengthy process that may take between 5 minutes and one hour depending on the performance of the computer system the software is run on.

After that is is simply a matter of selecting the installed language in the program's interface and restarting the computer. 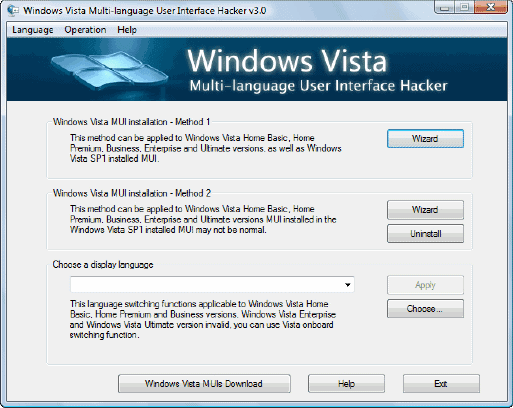 Download links to all available language packs are provided in the software program so that the user can simply download it right away. Switching back to the original language is not a big problem either. It is simply a matter of downloading the right MUI and applying the same procedure to the file.