Using the Internet to send print jobs to another computer that has a printer connected to it is usually more comfortable than trying to install the printer as a network device in a network. Share Printer software makes it as easy as possible to send a print job to another computer and connected printer. It usually only means that both computers have to run the same software to share the printer.

Samer recently discovered the software Printer Share which advertises itself as the ultimate no-brainer remote printing solution. One advantage of Printer Share is that the development company provides clients for Windows, Macintosh and Linux. The only requirement is an Internet connection on both computers to send the date.

Speaking of which. The company that developed Printer Share mentioned on their website that all data is encrypted before it is send which might make this printer software interesting for smaller businesses with at least two separate offices.

Sharing a printer could not be much easier. Both clients download the Printer Share software from the Internet and install it on their computer. Each has to register an account which will assign a unique username to it. The setup will also create a virtual printer called PrinterShare. If the user wants to print a document remotely he would simply send the document to the virtual printer which in turn asks the user where he wants to print it providing there is more than one remote location that is sharing a printer. 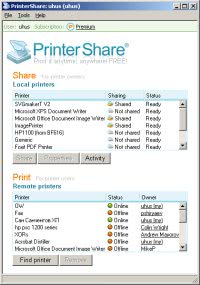 Any printers that are connected to a system can be shared by the system's owner. This is one mandatory step if the owner wants to share a printer with other users.

The service is offered as a paid and free service. The main difference is that a cover page is printed when using the free service which contains advertisement. This is not the case in the paid version which however costs $19.95 per month.

This software might appeal most to users and businesses who print papers on a daily basis. Users who have no need for a printer and print documents once or twice a month could as easily send the documents to the other computer owner per mail or use some other sort of file transfer and initiate the print job that way.

Martin Brinkmann is a journalist from Germany who founded Ghacks Technology News Back in 2005. He is passionate about all things tech and knows the Internet and computers like the back of his hand. You can follow Martin on Facebook or Twitter
View all posts by Martin Brinkmann →
Previous Post: « Manage Windows Services
Next Post: Task Manager Software Extension »