Calculating The Solar Potential Of A Roof

Solar Roof is a Google Maps mashup that can calculate the solar potential of a roof. If you ever wanted to find out if it would make sense to put solar collectors on your roof you can do so now by using the free service. This can be quite an efficient first analysis of the potential of the roof. It is probably nowhere near perfect and an expert who would come to your house to measure the solar potential would be definitely more accurate in his calculations but it should give a first overview of the potential.

Using Solar Roof is easy. The user begins by entering an address which Google Maps will then show on the map. He then begins to place array segments around the roof of the house that mark the house on the map, the part that should be analyzed should appear in yellow afterwards.

The script begins to calculate various parameters like the potential, the power per sq. ft., the area in sq. ft and total peak power as soon as the first array marker has been placed on the roof. Once all markers have been placed it is important to click the first marker again to signal that the roof has been completely marked. 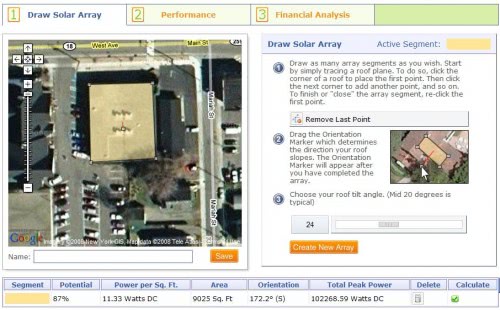 A click on the performance tab will load a monthly solar performance graph which will show the monthly output level in kilowatt hours. The calculations take region characteristics like weather cycles and cloud cover into account.

Solar Roof will also provide a financial analysis in the third tab. Users who enter their monthly electric bill and utility company will see how a solar roof would affect those bills. In the end it displays a chart that shows the break even date and the net costs if solar panels would be added to the roof.

Update: The Solar Roof website is no longer accessible on the Internet. Visitors from the United States can use the calculator at the Solar Estimate website instead.