Fleace, which stands for Flickr-Enabled Automatic Changer for Everyone, is an interesting wallpaper changer that uses Flickr as the main source for wallpapers. The system works straightforward. The user enters a few tags into the application or keeps the default tags (beach and puppy), changes a few options like the size of the source that should be downloaded, the countdown timer of the preview window or if a image that does not fit on the whole screen should be centered or stretched.

He can then change the wallpaper immediately by pressing the corresponding button. This button will open a smaller preview window that is displaying a thumbnail image of a random image that got pulled from Flickr. The image was tagged with at least one tag that have been set in the application itself.

A click on the Change button loads another image. This can be repeated until a suitable image has been found. There is no immediate acceptance button. The user has to wait until the countdown reaches zero which will automatically have the effect that the full image will be downloaded from Flickr and set as the system's wallpaper. 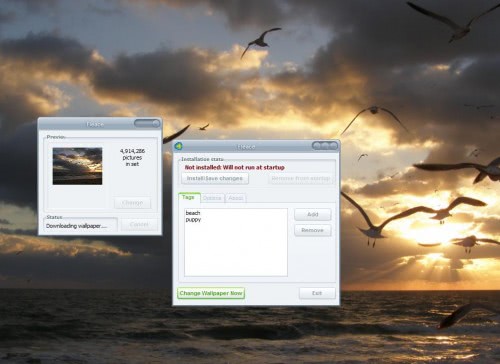 A click on Install / Save Changes will add the application to the system startup process. This will have the effect that Fleace will be autostarted and display its window so that the user can pick a new wallpaper. If he sets the countdown timer to 0 the whole process of selecting and setting a new wallpaper from Flickr will be invisible to the user. The application will terminate after changing the wallpaper on the computer system.

Fleace is compatible with all Windows operating systems beginning with Windows 95 including Windows XP and Windows Vista.

Update: The program has not been updated since 2009. While this often means issues with newer versions of Windows or with the site the data is pulled from, it is not the case at the time of writing for Fleace. The program works fine under a 64-bit version of Windows 7.