Drag And Display Photos On Your Desktop

Software Programs that combine an existing background wallpaper with additional information or files seem to be the latest trend.

Desktop Takeover is one of the latest variants. It introduces a feature that makes it possible to drag photos in the application which are then displayed on the desktop. The program comes with an option to capture the desktop wallpaper. Any photo that you drag on it is displayed on the computer desktop after applying the changes.

That probably sounds more difficult than it is. After starting Desktop Takeover you are greeted with a blank screen. Desktop Takeover does not make use of the initial desktop wallpaper unless it is added to the application as well. This is done by clicking on Wallpaper > Load New Background Image. The selected image should be shown immediately as the new background in the interface.

Additional photos can be added by dragging them into the program interface or by making use of the Add Photos button on top. Photos that have been added can be moved around and resized easily to fit the screen. Photos are automatically resized if they are to large to fit the screen resolution. 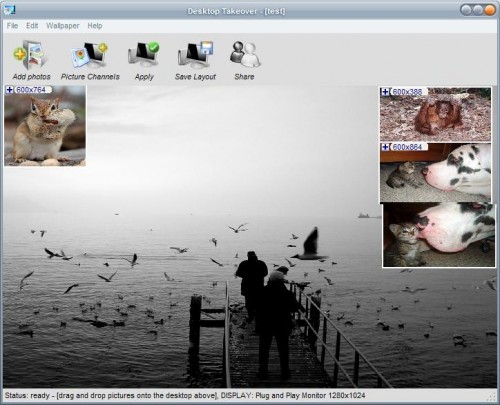 The developer's website shows a few examples of user desktops after adding photos to them, they show a world map and pictures of countries the user visited in the past, pictures of animal companions, trains, family pictures or cars.

The user can also drag and drop webcams or complete image folders on the desktop with ease. The build in desktop wallpaper changer makes it possible to use different wallpapers and photos that get changed automatically in intervals.

Desktop Takeover supports the creation of picture channels. Picture channels are series of pictures that get rotated in a slideshow-like fashion. Local images or webcam feeds can be used for this feature.

The options provide access to customization like setting picture transparency and multi-monitor options. One feature did not work on my computer though. The program offers the option to immediately resize and move images on the "real" desktop by left-clicking and holding the mouse button. It could be that this is driver related though.

I also experienced two crashes of the configuration window. The program itself remained stable however.

Desktop Takeover provides an easy solution to users who would like to add photos to their desktop that are placed on the desktop wallpaper.

Note that we don't support the application in any way, and have uploaded it only for archiving purposes.