Gabtastic provides desktop access to the chat applications Facebook Chat and Google Talk. Those two are normally only accessible on the Facebook and Google Mail websites which require a permanently opened browser during chat. The chats put some strain on the browser and system and using them in a desktop client instead could be a way to save system resources and browse responsiveness.

Gabtastik is a WebKit based Site Specific Browser (SSB) for web chat services currently in Beta that runs on Windows XP, Windows Vista and Mac OS X 10.4 or later computers. The Adobe Flash Player is the only other requirement besides an account at Facebook and / or Google Mail.

The beta version does not offered a lot of add-ons over the original chat applications on the websites. We already covered performance and the only two additional features are transparency which can be set in the desktop client and the ability to quickly switch between both chats. But that is more or less also provided in modern browsers where users can simply switch between tabs to do the same. 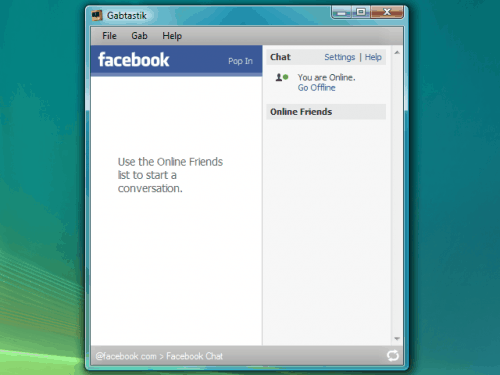 Interestingly enough the Mac client of Gabtastic in version 0.20 is supporting meebo as well providing access to several Instant Messengers like AIM, MSN and Yahoo while the Windows 0.21 version does not support these yet. The creators definitely have to add more value to the application to make it a must have alternative.

Update: Gabtastic has not been updated ever since its initial release in 2008. It is likely that the program is no longer working, and that you should use different programs for that. For Facebook Chat, you could use Skype, and for Google Talk, you could use the Chrome extension Chat for Google which can be detached from the Chrome browser.