How does Plurk work?

Are you as sick of hearing about Twitter as I am?

See the problem is that I never really â€œgotâ€ Twitterâ€¦ I tried, I really did. I signed up and followed people and Twittered regularly, but it never really did it for me. Eventually I just forgot about it.

Considering micro-blogging isnâ€™t something Iâ€™ve really got into you may be surprised I wanted to introduce you to this service. Some say itâ€™s just a better featured Twitter clone, but I think it has a great deal more potential then that.

Itâ€™s got a wicked name for a start.

No seriously, the name is actually brilliant. It manages to sound suitably web 2.0 without taking a killing the consonants and even works perfectly as a verb. Check out how they explain it:

It also demonstrates the sites tongue-in-cheek sense of humour, something which actually works in this caseâ€¦ *ahem* Sphinn (â€œStop right there! Weâ€™re going to have to see some IDâ€). In fact the Plurk blog is quite entertaining and worth a read.

Youâ€™ll find a nice attractive UI which features a colour scheme very similar to the WordPress dashboard. Here is an image of what to expect: 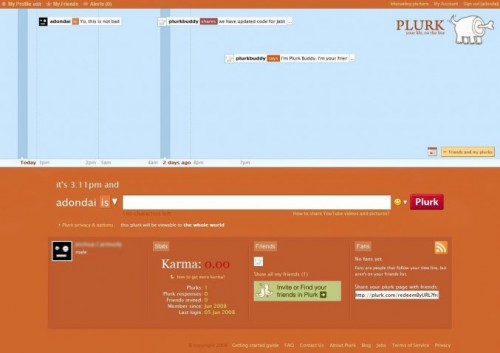 As you can see I have no contacts so itâ€™s not very fun at the moment, I would like to test drive the service properly so so why donâ€™t you join up and try it out too!

One particular element Iâ€™m liking is the horizontal orientated timeline, rather then the vertical focus of most services. Iâ€™ll be interested to see how itâ€™ll handle a lot of contacts because having to scroll across and down to view â€œplurksâ€ will be a pain.

Anyway, this isnâ€™t just a Twitter-plus-more-features start-up, itâ€™s a whole new take on micro-blogging and social networking in general.

Expect it to be big soon!

(If not, just expect it to be in TechCrunchâ€™s Deadpool by early next week)