Organize your PC Breaks with Off 4 Fit

I reviewed Workrave a while ago which displays notifications to PC users to take breaks regularly to prevent Repetitive Strain injuries.

Off 4 Fit is another application that reminds PC users that breaks need to be taken regularly. The difference between both applications is that Off 4 Fit comes with instructional animations that highlight exercises that it recommends users do during breaks.

Exercises are divided into the three categories Eyes, Hands and Body; each includes several exercises that can be done in environments with limited space; ideal for work environments.

Each exercise is explained visually by an avatar that demonstrates it over and over again as well as text that is displayed below the performance.

The first exercise for hands for example asks the user to stretch the finger joints while the first body exercise is all about stretching the body a couple of times. 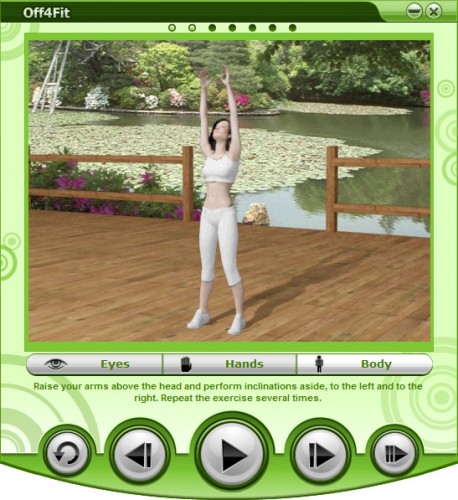 Each exercise is repeated several times. Basic controls allow you to pause, rewind or forward exercises at any time. The exercises are easy to learn which means that the animations are no longer needed eventually which should definitely be the first goal of a new user. It does not make much sense to exercise the eyes when you have to keep them glued to the computer monitor to understand the exercises correctly.

The other criticism that I have is the advertisement popup that appeared once that advertised another tool of the developer that would scan a computer's Registry. I have no idea on the frequency of those popups, it happened once during my tests but it is certainly annoying.

You can set break intervals in the application's options. Intervals range from every 10 minutes to every three hours.

Off4Fit is a handy workplace program for Windows users to move around a bit regularly to avoid repetitive strain injuries or other symptoms of working long hours on PCs.

Update: The program is no longer available on the developer's website. We have uploaded the latest release version to our own download server for archiving purposes. Note that we don't support it in any way. You can download the program with a click on the following link: Off4Fit