The security tools developers seem to be in a race currently to throw free versions of their products on the market in an effort to increase market share and brand awareness. The latest product is the Spyware Doctor 5.5. Starter Edition that can be downloaded with or without it's Antivirus addition. The software can be downloaded from Vnunet exclusively and is said to never expire which includes updates to the software and definition files.

The main purpose of Spyware Doctor is to scan the system for spyware and remove it securely. It does this by offering three types of scans, two pre-defined and one custom. It also features the so called Onguard Protection which is a real-time protection which is limited in this Started Edition. Only two of the seven Onguard Protections are available in the Starter Edition. The two that are enabled are the File Guard and Immunizer Guard. 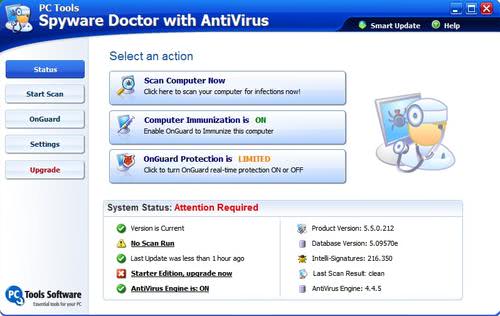 I cannot really say how effective the anti-virus module is and would not recommend installing it anyway, especially if you already use another antivirus software. The only limitation that was able to spot are those five Onguard Protections that are disabled in this version. They protect Processes, Startup Items, Network Settings, Cookies and Browser Settings.

Update: The program is no longer available as a free version it seems. I suggest you download and install Malwarebytes Anti-Malware instead. It is one of the best programs to give Windows systems a thorough malware scan.

Martin Brinkmann is a journalist from Germany who founded Ghacks Technology News Back in 2005. He is passionate about all things tech and knows the Internet and computers like the back of his hand. You can follow Martin on Facebook or Twitter
View all posts by Martin Brinkmann →
Previous Post: « Turn Windows Vista into Mac OS X visually
Next Post: Amic Email Backup »