Only administrators are allowed to format and eject removable hard drives in Windows XP Home and Windows XP Professional which could become a problem if you normally use a regular user account in Windows to increase system security or have to work on a system where you only have user access rights.

A Registry key controls which users may format or eject removable hard disks in Windows. The key can be changed by administrators to give additional user groups the right to format or eject hard drives on the system.

This can be useful if you are system administrator and run a regular user account on the system as well among other things.

Open the Registry by pressing Windows-R, typing regedit and hitting enter. This opens the Windows Registry editor which displays a folder like structure on the left, and the contents of each folder on the right.

Navigate to the Registry key HKLM\SOFTWARE\Microsoft\Windows NT\CurrentVersion\Winlogon and look for the string allocatedasd. The default value is 0 which means that only administrators may format or eject removable hard disks. If you want to change this you can set it to 1 to give the right to Power Users or to 2 to give the right to normal users as well.

Dasd sounds like a random string but it actually means Direct Access Storage Device. If you use Windows XP Professional you can also start gpedit.msc instead via the run dialog and navigate through Local Computer Policy > Computer Configuration > Windows Settings > Security Settings > Local Policies > Security Options and double-click the entry Devices: Allowed to format and eject removable media and change the setting from Administrators to the one that you require. 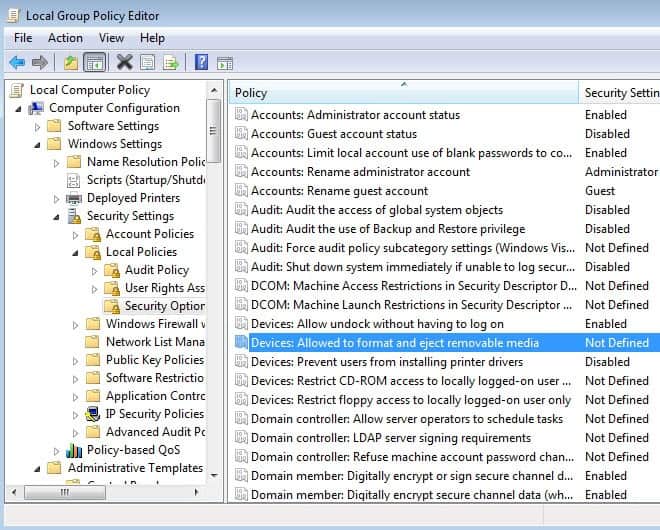 Update: The setting is also available in newer versions of the Windows operating system. You find it in the Group Policy Editor and the Windows Registry as well, and it has the same effect on those systems as well.

Martin Brinkmann is a journalist from Germany who founded Ghacks Technology News Back in 2005. He is passionate about all things tech and knows the Internet and computers like the back of his hand. You can follow Martin on Facebook or Twitter
View all posts by Martin Brinkmann →
Previous Post: « File Types Manager
Next Post: Use Related Icons for any Folder Icon »