Cuttermaran is a cut program for MPEG1 or MPEG2 video streams. The streams can be cut without recalculation and the cutting itself has no effect on the resulting video which plays fine like before.If you are looking for a freeware tool that lets you cut your mpeg1 and mpeg2 video files, Cuttermaran may be the program you are looking for. It requires Microsoft Net Framework 3.5 SP1 to work, the download link is provided on the programs homepage as well.

Probably the biggest restriction when it comes to the program, is that it only supports mpeg1 and mpeg2 video streams, which means that it can't be used to cut other video formats.

The program has other restrictions, that impact how it functions. It is for instance necessary to demux the video stream before cutting, and freeware decoders are required for smart rendering. The developer site links to some suggested decoders on the site, both free and commercial. 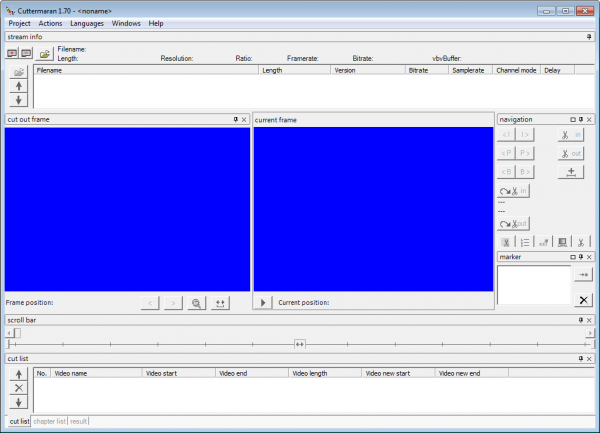 Update: Cuttermaran has not been updated since 2009, which indicates that the project has been put on ice, or that the developer may have stopped development completely. The latest version, Cuttermaran 1.70 at the time of writing, was released on 9/22/2009. It requires the Microsoft .Net Framework 3.5 SP1, and will run on all recent 32-bit and 64-bit editions of the Microsoft Windows operating system, starting with Windows 98 all the way up to the newest versions of the OS.

First time users may want to check out the (German) tutorial that is posted on the site. A translation service helps users who do not speak German.

Update: The tutorial is no longer available it seems. You may want to check out the excellent VirtualDub program as an alternative to Cuttermaran.