Increase Your Dropbox Space By 4.5 Gigabyte

We have talked about Dropbox's new camera import feature previously which allows you to import photos from digital cameras that you connect directly to your PC to your Dropbox storage. This can be useful if you use Dropbox to store your photos anyway. Free users may run into space issues pretty soon though, as individual photos these days take up Megabytes of free space.

Dropbox is currently running a promotion that extends the available storage space for users who use the service's photo import feature.

Storage space is increased in 500 Megabyte chunks by a maximum of 4.5 Gigabytes. For this to work, it is necessary to run the new Dropbox 1.3.12 client. This client is experimental and only linked at the Dropbox forum and not on the main site.

It is not clear if users will keep the additional storage space forever, or if it is only available in the beta period.

It is however likely that users will receive the space upgrade permanently.

To receive the update, users need to upload photos via the new photo import feature. If you do not have that many photos on your camera, you could simply shoot a lot of photos, connect your camera to Dropbox to get the additional 4.5 Gigabytes of online storage space.

Some users have reported that the feature is not available on their computer, even after installing the latest experimental Dropbox client. It is not clear why it is not there at this point, but there seems to be no option available to force it to appear. Dropbox also notes that photo import is currently not working under Linux or Apple Macintosh 10.4 systems.

The photo import feature relies on Autoplay, which needs to be enabled. This is done under Start Menu > Control Panel > Hardware and Sound > AutoPlay in Windows 7. 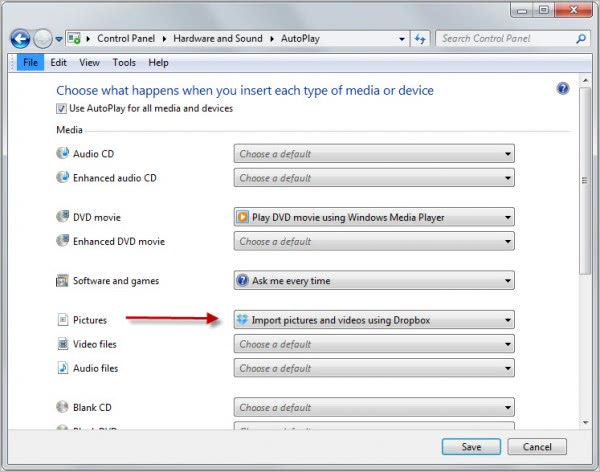 Check out the forum post and let me know if you were able to get the import option to work on your computer. (thanks Caschy)

If it works on your computer, you could use it to get an extra 4.5 Gigabyte of Dropbox storage. Not too shabby if you ask me.

Previous Post: « Why I Switched To The Duck Duck Go Search Engine
Next Post: « An Entertainment Boycott Is Not The Right Way