Many users do not like to use Adobe Reader when it comes to reading pdf documents on the computer because of its slow loading time which is mainly caused by the many plugins that are loaded during start-up. It seems to take ages until Adobe Reader initializes itself and displays the pdf document that one wanted to view.

Several freeware alternatives - like Foxit Reader - are available to display pdf documents as well and do that a lot faster than the Adobe Reader. I would like to introduce another possibility and that is to use the software Adobe Reader SpeedUp which speeds up the loading time of Adobe Reader tremendously.

It scans your system automatically for Adobe Reader versions and has the option to speed up the pdf viewer by removing some of the plugins that are loaded during startup. It is possible to either uncheck plugins manually or select one out of four different templates.

I decided to try the Turbo template which loads only a handful of plugins. This had the effect that Adobe Reader was starting instantly, almost as fast as if you would be starting Notepad. This is a huge difference to the time it took to start before. 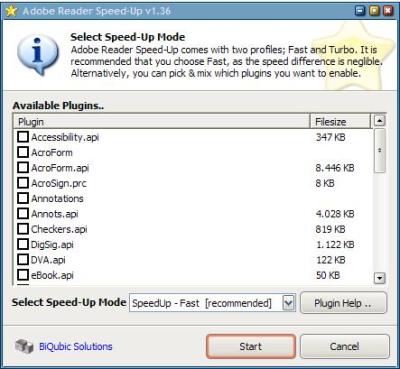 You might want to make sure that you do not need the plugins that are deactivated in this process. The Plugin Help button explains what each plugin does which means that you can now make a decision based on those information.

I'm using Adobe Reader to view pdf documents which works well with the Turbo setting. If you use it for instance to view ebooks protected with DRM you would need the eBook Adobe DRM plugin.

Update: Adobe Reader Speedup has been discontinued A working alternative for Windows is PDF Speedup which offers a similar feature set. The program is compatible with older and the latest Adobe Reader.

You need to install the program before you can use it. It offers the following options: