How to defeat most keyloggers on public computers

The simple keylogger records every keystroke while more advanced ones make screenshots and record mouse movements as well. The idea for this article was born while reading the excellent Technospot article about keyloggers. The most secure way to defeat keyloggers is of course not to use public computers at all, and to keep a good eye on your own systems or the systems you are working on.

You sometimes do not have a choice though which leads to the next most secure way to defeat them: Live CDs. If you are allowed to boot from DVD or CD you should pop in your Linux live CD and use it to go online. This defeats all software keyloggers but not the hardware ones obviously.

Next in line is a method detailed by Technospot which suggests that you should do the following when entering usernames and passwords:

Let us assume you want to type in ghacks and fear that a keylogger would record the string. What you could do is add random chars to the string and replace them with the ghacks chars. You begin by typing "re4", mark the three chars with your mouse and type the "g". Then after the g you would write "bt" and replace bt with "h".

This is a great method to defeat software keyloggers that do not take screenshots when moving or clicking the mouse.

A quick check of the system tray and if possible the task manager could also reveal several keyloggers as long as they are not running in stealth mode. 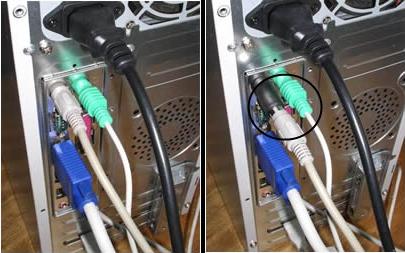 So, a quick look at the back of the PC is a good way to start. If you see anything connected between the keyboard cable and the PC, or something inserted into an USB port at the back, you may want to check it out closer before you do anything.

The most secure alternative would be to use your own notebook to connect to the Internet which defeats all keyloggers but not programs that record network traffic.

What you may be able to do instead is to use the public computer only for things that you have no problem revealing. So, instead of checking your Gmail account or logging in to Facebook, you may use it to look up an address on Google Maps or use a search engine.

Pre-hijacking Attacks of user accounts are on the rise

Previous Post: « Things to do before you sell your digital camera
Next Post: « Secure USB Device called Flash Padlock