I barely finished the article about the first USB devices with an build in Iris scanner when the next developer -- Corsair -- announces a system to secure data on USB devices called Flash Padlock.

It is basically a USB stick with one or two Gigabytes of space that is protected by a pin that has to be entered on the device itself before data on the flash drive becomes available.

The user may choose a pin with up to ten digits which is then used to unlock the data on the device and to make it read and write accessible for devices it is connected to.

Flash Padlock, developed by Corsair Memory, automatically locks itself when removed from the device it is currently connected to.

The main advantages of Flash Padlock are: 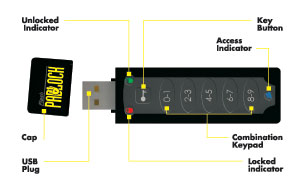 The limitation to a maximum of ten digits for the pin makes it vulnerable to brute force attacks as there is only a limited number of possible combinations available. While it may still take time to get the right code, a system that is more flexible would improve security further.

If you compare that to a software based solution such as TrueCrypt, you see the limitation clearly immediately. If you use software-based encryption, you can choose keys of any length and select additional characters to increase the character range.

The Flash Padlock advantage on the other hand is that it can be used without software and that it does not rely on any operating system. Since encryption and decryption happens on the device directly, it is completely independent from any third-party applications.

In addition, it is protecting data on the stick and while it may not be unbreakable, it surely puts a barrier between the data and any unauthorized attempt to access it.

Flash Padlock comes in two models offering one and two gigabytes respectively and a price of around $40 for the two Gigabyte stick.

Update: Recent models of Corsair's Padlock come with higher capacities. The company is making available Padlock2 devices with 8, 16 and 32 Gigabyte of storage.