Netflix is testing a new way to tackle the password sharing problem. The streaming service is introducing, Netflix Homes, an additional fee that users may have to pay, if they are sharing their account with others. 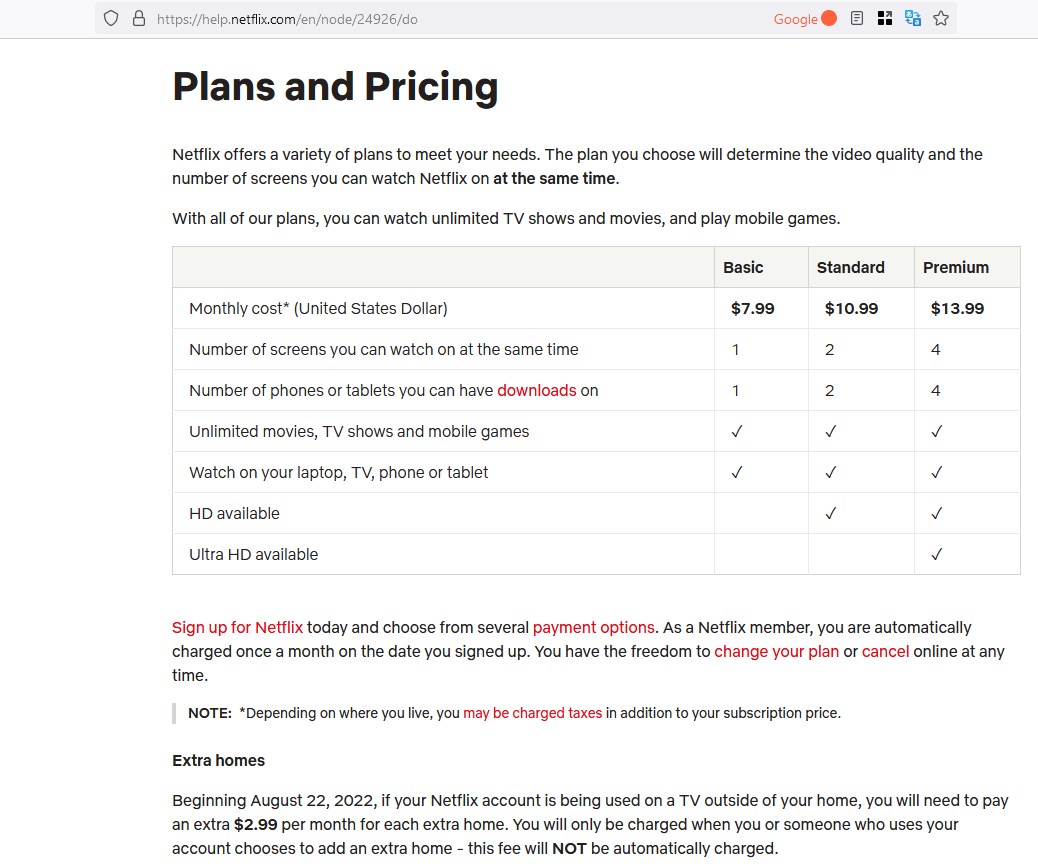 This isn't the first time the streaming service has complained about the problem, it did so last year too. A few months ago, Netflix claimed that it was "losing money" because many users opted to share the account that they paid for, with their family and friends. In March 2022, the company announced its intention to tackle this problem by allowing users to add extra members to their account. The tests began for users in Chile, Costa Rica and Peru.

What are Netflix Homes?

And now, the company has replaced it with an alternative called Netflix Homes. Per an article published on its blog, Netflix users in Argentina, El Salvador, Guatemala, Honduras and the Dominican Republic, who want to share their passwords with other users, will have to pay a fee of 219 Pesos (Argentina), or $2.99 (in the other 4 countries), on top of their regular plan's fee. The service defines the feature as follows, each Netflix account will include one home where you can use it on any of your devices. Every additional home that you add to your account will have to pay the extra free. You can refer to the prices on the official site. 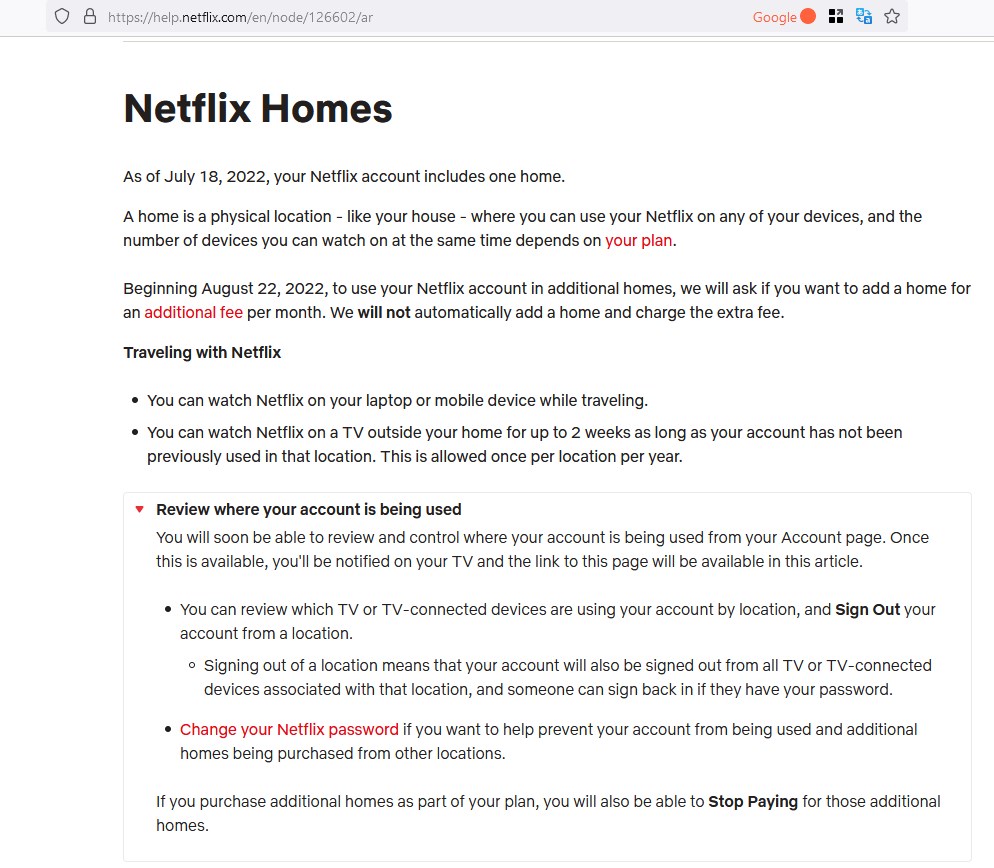 Netflix will allow users to access the service while on-the-go, on tablets, mobiles and laptops. How does it work? A support article for Homes, states that Netflix will not automatically add a home and charge the extra fee. It also mentions that the service detects homes by using IP addresses, device IDs and account activity. Users may encounter an error like "too many homes", if a device is connected to a VPN, proxy, or unblocker service.

Users who travel can access Netflix on a TV outside your home for up to 2 weeks, but there is a catch. Your account should not have been used at the location previously, and this is only allowed once per location per year.  You will be able to click Learn More to view the locations where their account is accessed, and optionally choose the "Yes, Replace Home" option. This option can only be used 3 times every 6 months.

Paying the additional fee will remove these limitations. Users can add or remove Homes manually by reviewing their account page using a web browser.

Note: These examples include just one extra home per plan, and does not include taxes. 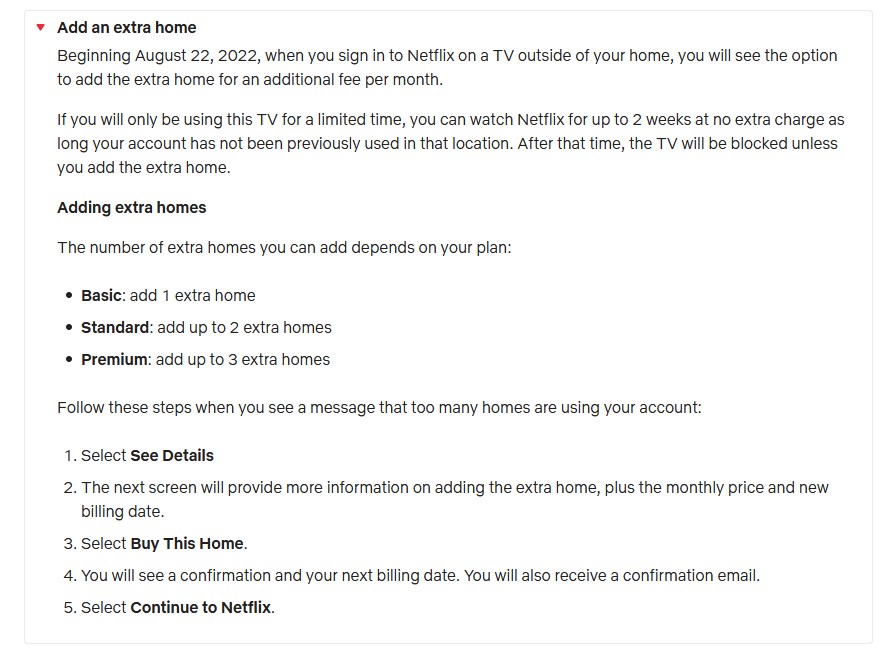 The Basic plan will allow you to add 1 extra home, the Standard plan allows up to 2 extra homes, and the Premium plan supports up to 3 extra homes. The Netflix Homes subscription rule will come into effect on August 22, 2022. On a related note, Netflix is also set to partner with Microsoft to introduce a new lower priced ad-supported subscription plan. 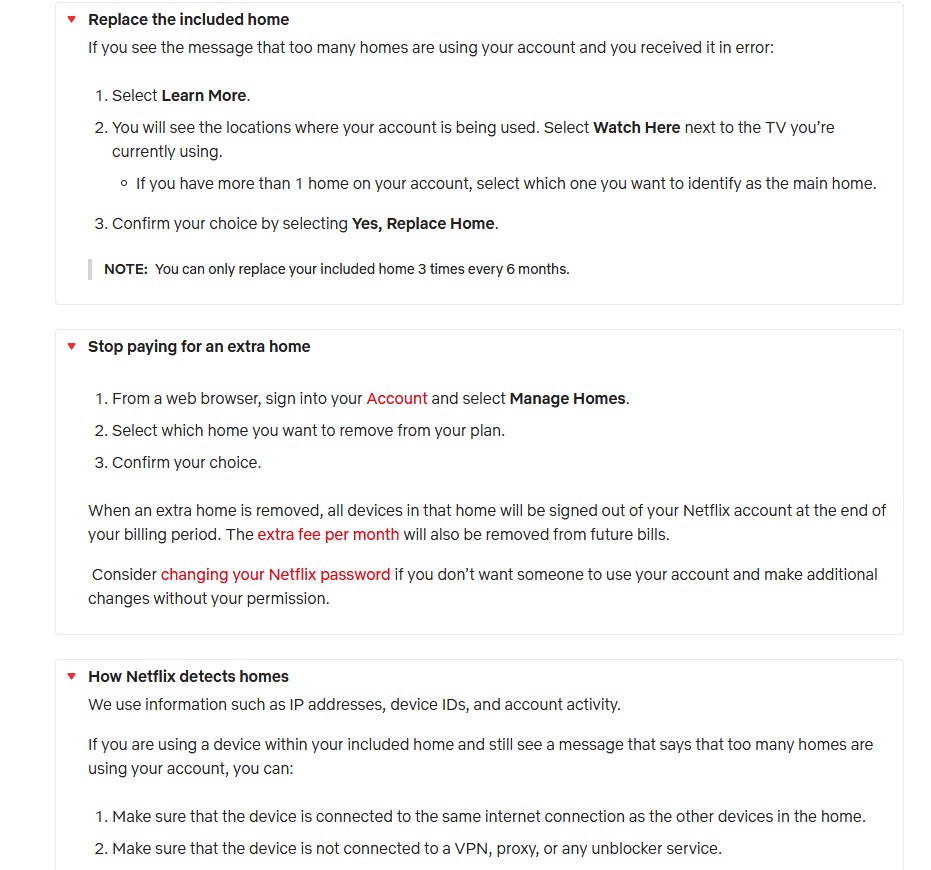 I don't think password sharing alone is to blame for Netflix's supposed poor performance. The problem starts with the fees that these streaming services charge people. A $5 or $10 monthly subscription (basic plan) maybe fine for some users, but the service may not have access to all the shows that someone may want to watch. Imagine paying $10 for some TV shows (e.g. Netflix originals), but then you realize another show that you like is only available on another service, or has left Netflix (in favor of another one), you now have to pay more for it.

Throw in some sports into the mix, and you could easily end up footing a bill upwards of $30 or $50 per month, which makes it a bit of luxury for many people. This is why people resort to sharing the passwords, not because they don't want to pay for it, but because they are already paying for something, but are not getting what they want on the platform. By sharing a subscription with their family members and friends, they may get access to a different steaming service in return to access more content.

I doubt that charging people more money to share their account is actually going to help the service, if anything it could have the opposite effect, and drive them away to their rivals. I know people who split the fee for Netflix subscriptions because they are only interested in a specific TV show or two, and don't want to pay the full price.

Do you share your Netflix account with your friends and family? What do you think about the extra charges?

Previous Post: « Opinion: I love the tab grouping feature of web browsers
Next Post: « Netflix's ad-supported plan could be available for $7 a month