You may block heavy ads in Google Chrome natively now

Google announced plans in 2019 to do something about what it calls heavy ads in the company's Chrome web browser. The effort complements other targeted ad-blocking implementations in Chrome that it launched earlier.

Advertisement on the web needs to meet at least one of the following criteria to be considered heavy:

In other words: any advertisement (including all its descendant frames) that uses too much CPU or network bandwidth. Any ad that meets at least one of the criteria is considered heavy if the user has not interact with it already. Google Chrome will block ads in the browser once they are identified as heavy. 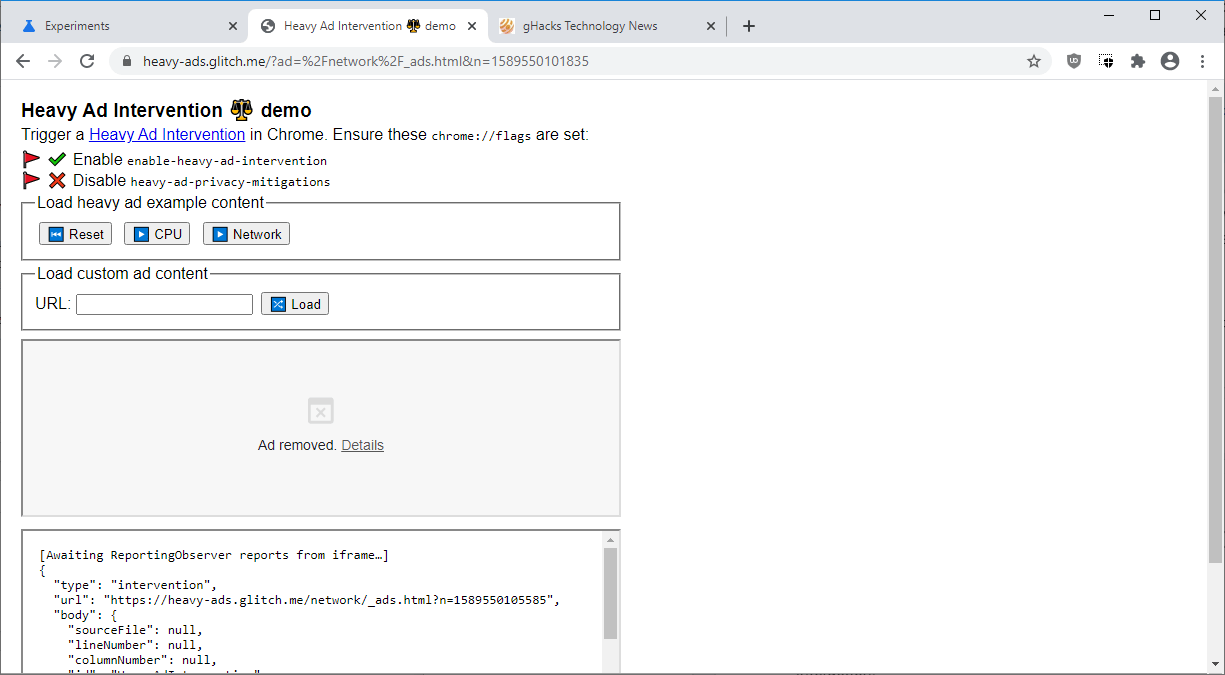 In order to save our users’ batteries and data plans, and provide them with a good experience on the web, Chrome will limit the resources a display ad can use before the user interacts with the ad. When an ad reaches its limit, the ad's frame will navigate to an error page, informing the user that the ad has used too many resources.

Google reveals how it came to define heavy ads. According to Google, the company looked at the "most egregious ads" and set the thresholds accordingly. About 0.3% of advertisement on the web exceeds Google's limits today but these account for 27% of network data and 28% of CPU usage of all advertisement according to the company.

Google wants to launch the ad intervention in August in Chrome stable. Chrome users can enable the feature already in Chrome in the following way:

Chrome will block ads that meet the criteria for heavy ads after the restart.

Google is trying to make advertisement on the web more tolerable by fighting against abusive ad formats, publishers and advertising companies. One of the hopes is that users who don't use ad-blockers yet will not be tempted to switch to extensions or services that block advertisement because the nastiest advertisements are blocked by the browser.

As far as heavy ads are concerned, it needs to be noted that these are blocked only after they reach one of the thresholds in the browser and not before.

Publishers and advertising companies can check out this technical article that provides details on how to analyze ads and resolve the situation.

Google announced in February 2020 that it plans to block annoying video ads in Chrome as well.

Now You: What is your take on the latest incentive in this regard?

Article Name
You may block heavy ads in Google Chrome natively now
Description
Google announced plans in 2019 to do something about what it calls heavy ads in the company's Chrome web browser.
Author
Martin Brinkmann
Publisher
Ghacks Technology News
Logo

Martin Brinkmann is a journalist from Germany who founded Ghacks Technology News Back in 2005. He is passionate about all things tech and knows the Internet and computers like the back of his hand. You can follow Martin on Facebook or Twitter
View all posts by Martin Brinkmann →
Previous Post: « Google Chrome is getting Tab Groups soon
Next Post: Google tests Tab Groups Collapse option in Chrome »