Mozilla will release a new Firefox version every 4 weeks from 2020 on - gHacks Tech News
ghacks.net

Mozilla announced on September 17, 2019 that it will speed up the Firefox release cycle from 2020 onward for all Firefox channels.

New Firefox versions get released every six to eight weeks currently after Mozilla switched to a variable release schedule in 2016. The browser maker started to ship new versions of the browser every six weeks in 2011 when it switched to a rapid release cycle.

Mozilla uses a phased released system that moves new code from cutting edge Nightly versions of the browser through Beta and Developer editions before they reach the stable version and the majority of users. So-called Firefox ESR (Extended Support Release) versions are maintained for Enterprises and organizations that follow the same release cycle but with less frequent feature changes. 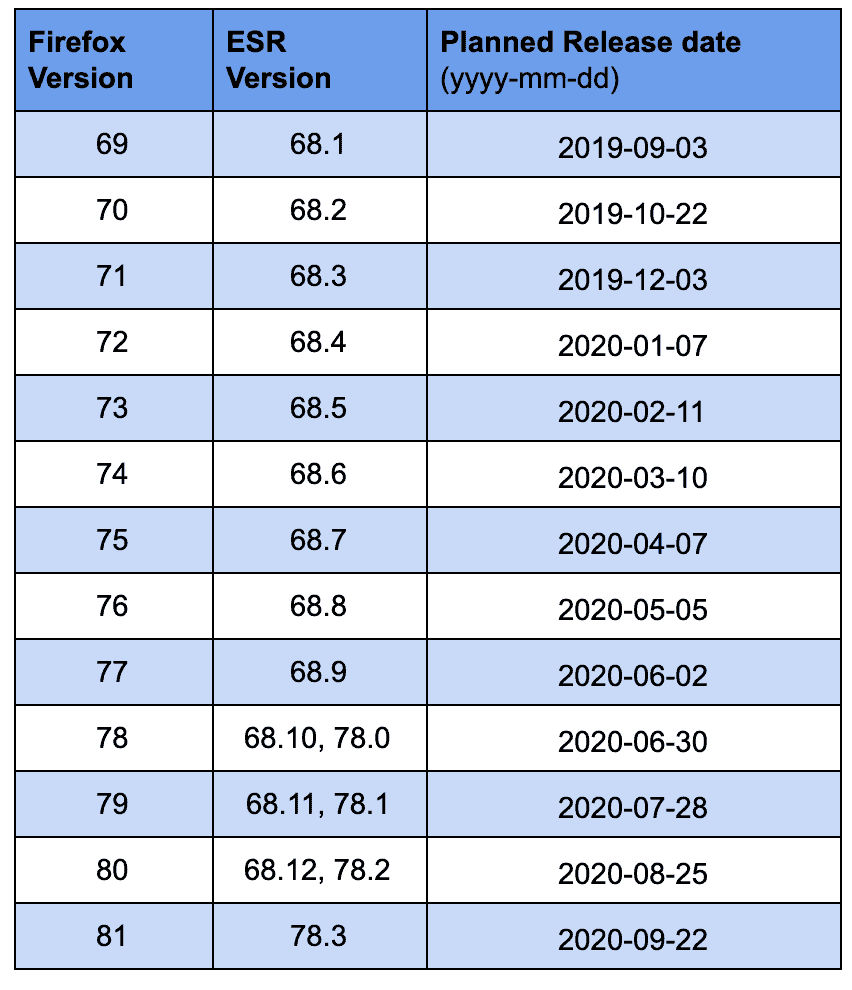 Starting in the first quarter of 2020, Mozilla will release a new version of the Firefox web browser every four weeks.

We’re adjusting our cadence to increase our agility, and bring you new features more quickly. In recent quarters, we’ve had many requests to take features to market sooner. Feature teams are increasingly working in sprints that align better with shorter release cycles. Considering these factors, it is time we changed our release cadence.

A shortened release cycle has risks associated with it and Mozilla wants to maintain release quality and reduce these risks through careful planning, testing, quality management and staged rollouts.

One of the planned changes increases the number of beta builds that Mozilla produces in a week up from two similarly to how Firefox Nightly updates are handled by the organization.

Staged rollouts play an important role in the new strategy to help "minimize unexpected (quality, stability or performance) disruptions to our release end-users".

The release cycle is moved slowly from the 6-8 week cycle that is currently used down to five and then four weeks over the next quarter and the first quarter of 2020.

We have updated our Firefox release schedule overview to reflect today's announced changes.

A four week release cycle is a massive undertaking for Mozilla; if the organization manages to keep up the quality of releases while introducing new features more quickly to the Firefox audience, it could be a win-win situation for everyone.

ESR administrators will have to adjust to a faster release cycle as well but since the move to new major ESR versions remains the same, it should not be too problematic.

Now You: what is your take on the decision?

Article Name
Mozilla will release a new Firefox version every 4 weeks from 2020 on
Description
Mozilla announced on September 17, 2019 that it will speed up the Firefox release cycle from 2020 onward for all Firefox channels.
Author
Martin Brinkmann
Publisher
Ghacks Technology News
Logo

Previous Post: « Improve your Amazon Prime Video experience with Refined Prime Video
Next Post: Here is what is new in Firefox 69.0.1 Stable »