It feels like it has been just a couple of months ago that Mozilla updated the logo of the Firefox browser.

Today the organization announced a new project to evolve the Firefox brand that better reflects the diverse nature of products that fly under its umbrella.

The classic Firefox icon, the fox with a tail in red and yellow colors that encircles a blue globe, "doesn't offer enough design tools to represent [the] entire product family" anymore according to Mozilla.

The organization put a team of product and brand designers to work to create a new design system that "can guide people smoothly from [Mozilla's] marketing to [the company's] in-product experiences".

The announcement showcases two different design systems. Nothing has been decided yet according to Mozilla and the organization asks for user feedback explicitly.

The designs that Mozilla published are not final and Mozilla notes that "each individual icon will undergo several rounds of refinement". Some icons may change completely, and the focus right now is to get the design system right.

Here is design system one: And here is the second design system that Mozilla published on the official Firefox website. 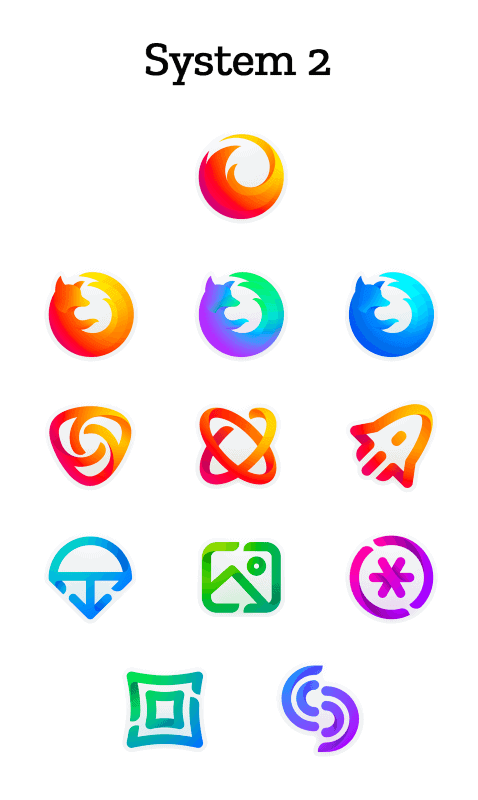 Mozilla published several questions that it will use to evaluate the work:

The blog post provides additional details on the design systems. It highlights that each system is led by a masterbrand icon (the one you see at the top).

The masterbrand icon will show up in our marketing, at events, in co-branding with partners, and in places like the Google Play store where our products can be found. Who knows? Someday this icon may be what people think of when they hear the word “Firefox.”

What follows are general-purpose browser icons. You may associate them with different Firefox channels.

Singularly-focused browser icons, for Firefox Rocket for instance, are shown on the next line.

The icons relate to different Firefox products and it is the color and graphics that unite all of these products under the master brand.

Work has just started; Mozilla is working on typography, graphic patters, motion, naming, and more which will be ready for the final design reveal.

Still in the works are explorations of typography, graphic patterns, motion, naming, events, partnerships, and other elements of the system that, used together with consistency in the product, will form the total brand experience.

Anyone can leave a comment on the official Mozilla website, or here on the blog, to express their opinion about the suggested design families.

Now You: What is your take on these?