Groove Music for Android and iOS will be retired - gHacks Tech News
ghacks.net

Groove Music for Android and iOS will be retired

Microsoft announced today that it will retire the Groove Music applications for Google's Android and Apple's iOS operating systems on December 1, 2018.

The applications won't work anymore from December 1, 2018 on and Microsoft recommends that users uninstall them from their devices.

Music will continue to be available in OneDrive according to the support page, and Microsoft encourages users to use the Groove Music app for PC, Xbox, or Windows Phone to play it.

On December 1, 2018, the Groove Music iOS and Android apps will be retired. Your personal music files will continue to be available in OneDrive. You can keep listening to those files, and your playlists, with the Windows 10 Groove Music apps on PC, Xbox, or Windows Phone. 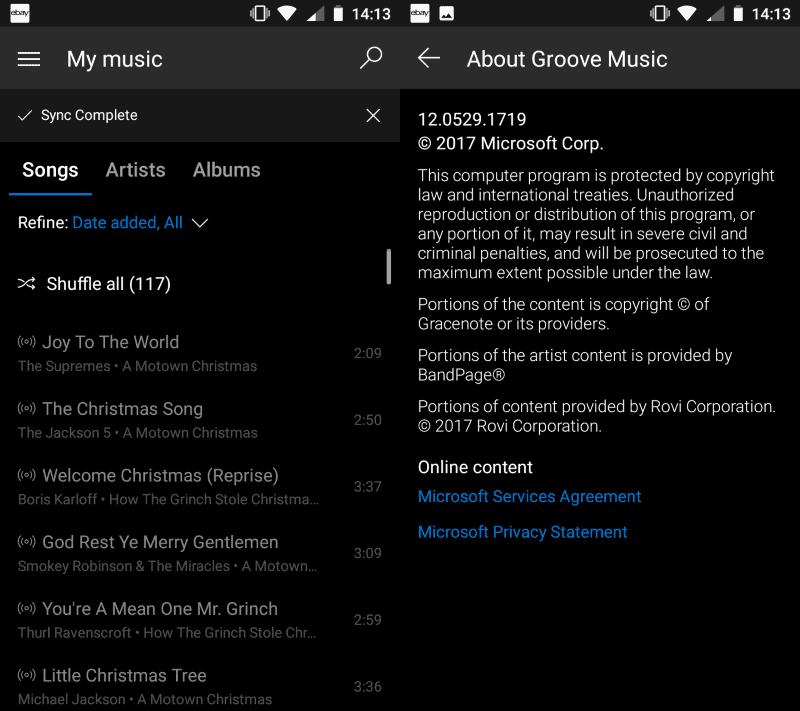 As far as playing music on Android or iOS is concerned, Microsoft suggests that users play music through the OneDrive application or switch to Google Play Music or iTunes Match to do so.

OneDrive is available as an application for iTunes and Android but it is a file sync and storage solution first and foremost. While it supports playback of media, it is not as well suited for that than dedicated applications to play music on mobile devices.

Microsoft put an end to its own music offerings in Windows 10 when it retired Groove Music Pass and limited the Groove Music application by removing support for streaming, purchasing or downloading music.

Grove Music is still available for Windows 10 devices but it remains to be seen for how long this will be the case. Grove Music was updated regularly by Microsoft whereas the applications for Android and iOS did not receive as much attention from the company.

Still, Grove Music for Android has a solid 4 out of 5 star rating and more than one million installs on the platform.

The current version of Groove Music does not inform users yet about the upcoming retirement of the application.

Now You: Do you use music apps on your mobile devices?

Martin Brinkmann is a journalist from Germany who founded Ghacks Technology News Back in 2005. He is passionate about all things tech and knows the Internet and computers like the back of his hand. You can follow Martin on Facebook or Twitter
View all posts by Martin Brinkmann →
Previous Post: « Netflix for Android update brings fast forward button
Next Post: How to use Android Messages on the desktop »