Chrome uses on Windows could not use Chrome Stable and one of the pre-release versions of the browser side-by-side up until now.

This changes with today's announcement as Google lifted the restriction. This means that it is now possible to install and run Chrome Stable and pre-release versions of Chrome on Windows.

Google notes that this has been a problem for web developers as they had to decide between running stable Chrome for testing or a pre-release version.

Historically it's been impossible to install these pre-releases on the same computer as stable Chrome, forcing developers to choose between testing their site in the next version of Chrome and experiencing their site as users see it now. 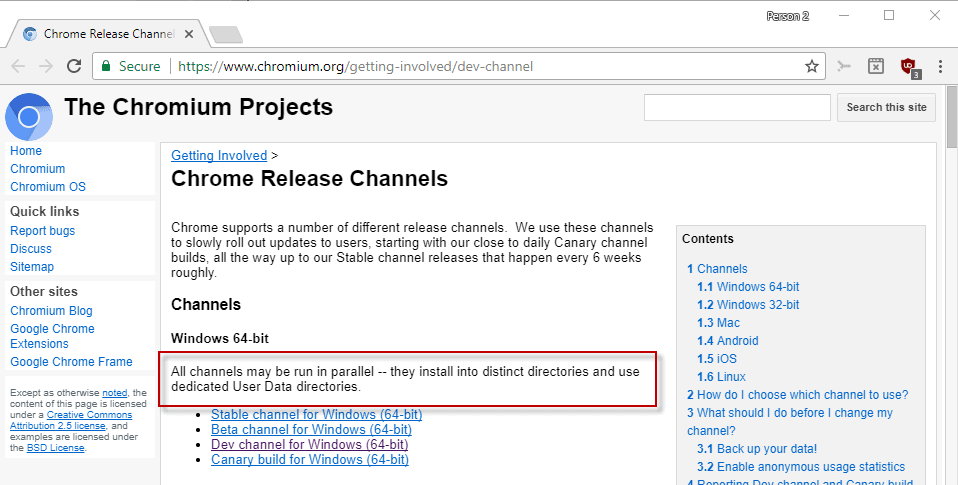 Chrome users may install and use Chrome Beta and Chrome Dev on the same computer that Chrome Stable is installed on starting today.

This adds Windows to the operating systems that support side-by-side installations (Android and Linux support the feature already). Google promises that it will bring the feature to other platforms in the future as well.

Chrome Stable users and admins can install Chrome Beta or Dev from the official download site. The page highlights the fact that all Chrome channels may be run in parallel on Windows.

Pre-release versions of Chrome need to be removed and re-installed if Chrome Dev or Beta are installed already on a system with Chrome Stable according to Google.

Canary and Chromium versions were exempt from the restriction in the past.

I checked the Chrome installations on a test PC and found Chrome Stable, Development and Canary installed on it. While I cannot say anymore whether it was possible to run the browser's side by side, installation at least seems to have been possible before.

I'm able to run Chrome Stable and Dev side by side however without going through the recommended removal and reinstallation of Chrome.

I'm not sure if this has something to do with me using an offline installer for Chrome, or using different profiles for Chrome Dev and Stable.

Now You: Do you run Chrome?

Article Name
Run Chrome Stable, Beta and Dev side-by-side on Windows
Description
Chrome uses on Windows could not use Chrome Stable and one of the pre-release versions of the browser side-by-side up until now.
Author
Martin Brinkmann
Publisher
Ghacks Technology News
Logo

Martin Brinkmann is a journalist from Germany who founded Ghacks Technology News Back in 2005. He is passionate about all things tech and knows the Internet and computers like the back of his hand. You can follow Martin on Facebook or Twitter
View all posts by Martin Brinkmann →
Previous Post: « Microsoft's Windows 10 Accounts Chrome extension
Next Post: Google tests new perma-silence feature for sites in Chrome »