Windows 10 Pro for Workstations comes with a set of new features and expanded hardware support.

The company plans to launch the new edition of Windows 10 alongside the release of the Windows 10 Fall Creators Update which will be out in the coming months.

Workstations are Windows PCs that come with hardware designed to push performance as far as possible -- well beyond the home and even most of the professional market. These systems are often equipped with Terabytes of RAM and multiple CPUs, and used for demanding applications such as video editing, 3D modelling, or other demanding tasks. 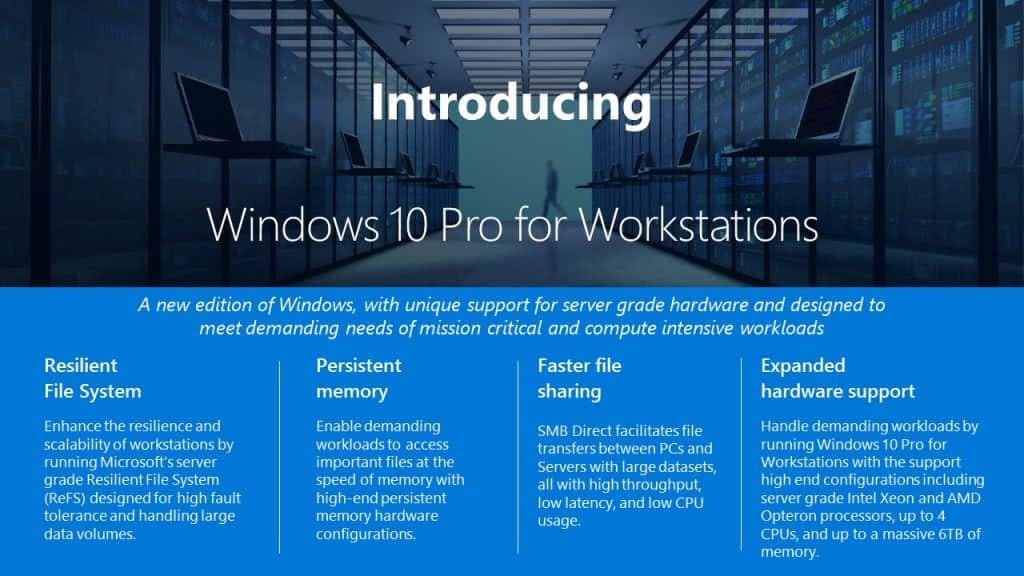 Windows 10 Pro for Workstations is Windows 10 Pro at its core. It can be distinguished by four improvements and changes that it ships with.

The reveal on the official Windows Business blog did not reveal the price point of the new edition.

Additionally, it failed to showcase the core differences to existing Pro editions of Windows 10. Considering that Windows 10 Pro supports ReFS and SMB Direct, the sole selling point of Windows 10 Pro for Workstations appears to be the extended hardware support.

This may be enough reason for some businesses to purchase the new Windows 10 for Workstations. As far as price is concerned, it is likely that the new edition will be more expensive than regular Windows 10 Pro editions but not as expensive as Windows Server editions.

Now You: Why is Microsoft releasing a new version of Windows 10 Pro? What's your take on this?