Win10Clean is an open source program for Microsoft's Windows 10 operating system that provides you with quick access to common tweaks and options to remove installed Windows apps and programs.

The program comes with functionality that you find in many Windows 10 privacy applications as well, but it has not been designed specifically for that purpose by its developer.

In fact, Win10Clean is rather limited in regards to the tweaks that you can make when you run it. 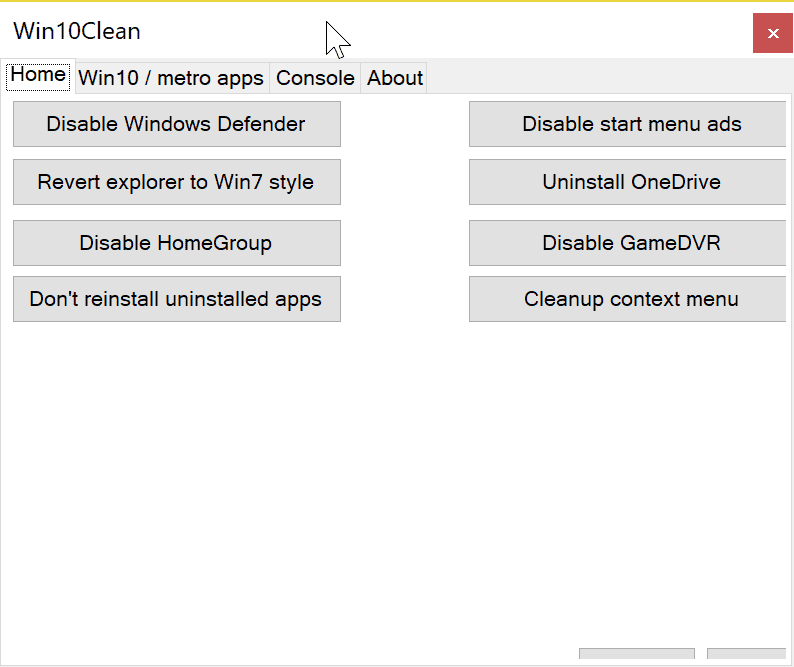 Win10Clean does not need to be installed. It is a Microsoft .NET application however and requires the Microsoft .Net Framework 4.6 to run.

The application itself uses tabs that divide the tweaks from software uninstallation and the console.

Win10Clean is not optimized for high resolution displays as some interface elements may not be displayed correctly. This is true especially for the two bottom buttons "update" and "close" under Home, and "refresh" and "uninstall selected apps" under Win10 / metro apps.

The program window cannot be resized which adds to that issue. You may be able to use a workaround as described in the resize windows with fixed sizes guide, but I did not test that.

As far as the tweaks are concerned, Win10Clean supports the following in version 0.12.1.

Most of the tweaks can be applied individually as well. Some can be made in the Settings application, others require that you make changes to the Registry or Group Policy.

A click on a tweak displays a confirmation prompt. This prompt lacks any description of the selected tweak, and displays only "are you sure" and yes/no options.

The removal of the Windows 10 applications displays more apps than the dozen or so system apps that Windows 10 ships with and lists prominently in its interface.

Note that some are required for functionality, and should not be removed. You can select one or multiple applications from the listing, and hit the remove button to uninstall them.

You may check the "all users" button to run the process for all system users, and also delete the apps from the image.

It is recommended that you create a backup before you run any operation as the program itself does not include options to restore the system.

Win10Clean is a work in progress. It shows in the program's version but also in usability issues like the missing option to resize the window, some spelling errors, or the confirmation prompts.

The program could use a bit of polishing, more functionality, and a backup and restore option.

Martin Brinkmann is a journalist from Germany who founded Ghacks Technology News Back in 2005. He is passionate about all things tech and knows the Internet and computers like the back of his hand. You can follow Martin on Facebook or Twitter
View all posts by Martin Brinkmann →
Previous Post: « Sys Minion: run Windows system commands
Next Post: WinRAR 5.50 released with important changes »