Notion was introduced to me by a long time friend on the IRC Network I am staff on, as part of a major gaming community. He almost exclusively used Notion for the longest time, and barely ever touched his mouse, doing nearly everything by keyboard. He was hardcore. I have dabbled with Notion from time to time, but never stuck with it longer than a couple weeks at a time.

However, I have always been intrigued by it, and actually found it remarkably useful for working, especially when I have multiple terminals going, a text document or two, a browser window, and music going. It's ESPECIALLY useful in my opinion when running multiple monitors. I will break this down further later.

Notion is one of quite a few window managers that fall into a category called “tiling” window managers, or to break that down further, they split your screen into multiple squares / rectangles usually, that tile, and have your various programs in each tile.

If you read my previous article about the Openbox WM, all I simply did was install Notion, log out, switch to Notion, and log back in before starting to write this. No software changes have been made. 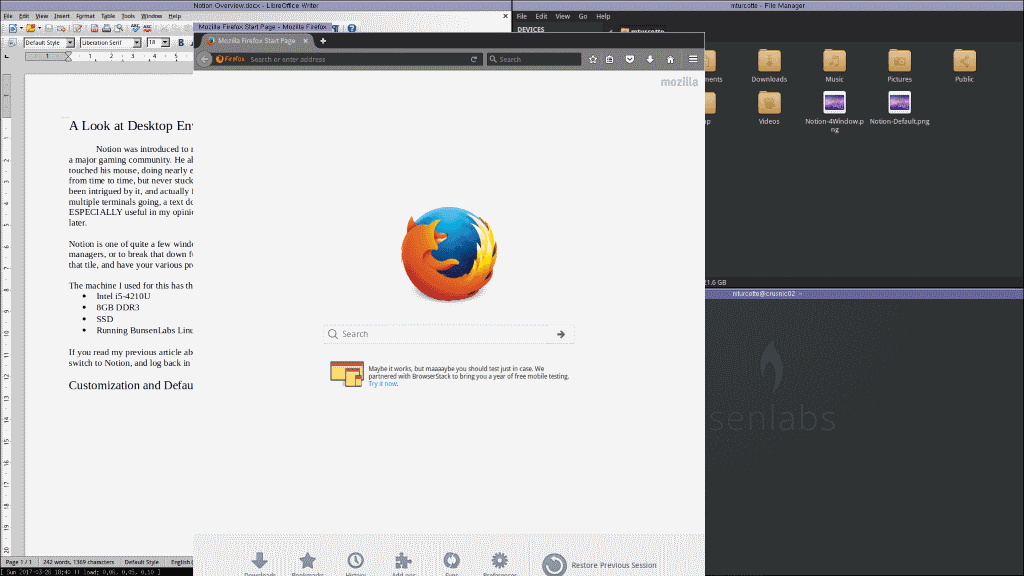 Notion can't be themed in a traditional sense. You won't be setting wallpapers or adding widgets or anything if you run notion. Actually, you won't be customizing Notion in any conventional sense, and if you decide to run a window manager like Notion than you should....get the notion....of theming out of your mind entirely (I had to...)

Notion literally breaks your screen down into tiles, that can be stacked, rearranged, split into sizes etc. When I am running a single monitor, I usually split my screen four ways, and run something like this: 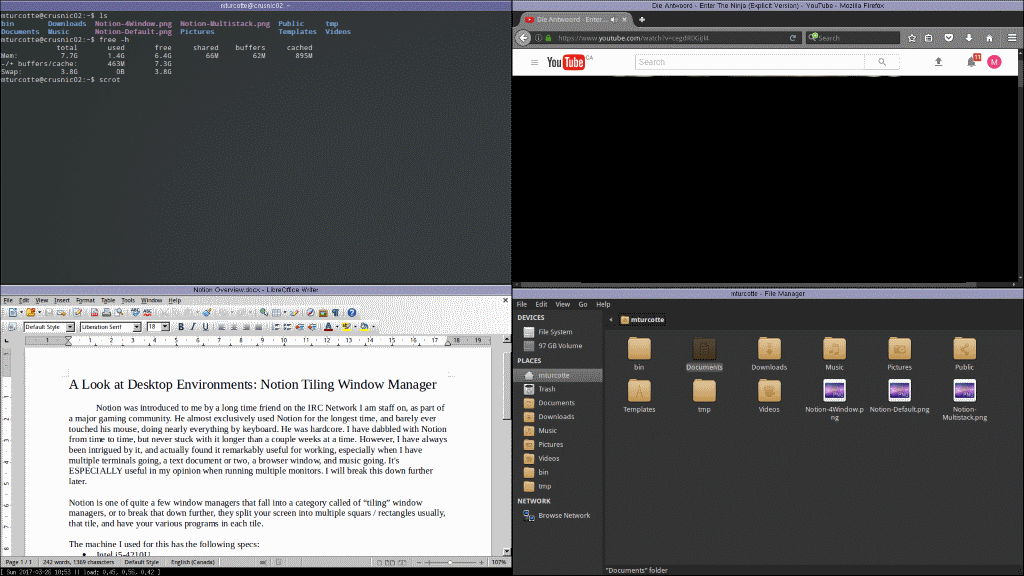 You also have to ability to have floating windows (first screenshot).

When running dual monitors I find it especially awesome, because I can have Firefox with a video over half the second monitor with my IRC client on the other half, and then my main monitor can have a VPS Terminal, Local machine Terminal, Firefox meant for browsing about whatever I want, and a last window for whatever else I need it for at that time.

Each Tile can also have multiple tabs; so my VPS tile usually has 2-3 tabs each with a terminal connected to a different server each if I am working on multiple things.

These are just some examples of how you could use Notion, but ultimately you will find your own useage and comfortable setup based upon your own needs.

Notion doesn't come with a software suite of its own. It's JUST the window manager. You will use whatever you had installed on your system before Notion, and can install whatever you want from within Notion.

This one is actually hard to give accurate numbers on. When I shut Firefox and LibreOffice down, my system reported still over a gig RAM being used.

However, I know that Notion runs on netbooks like there's no tomorrow, so I decided to look into exactly what processes were using RAM, and Notion wasn't even in the top 15. Xorg, NetworkManager, and systemd all were using FAR more ram than Notion was; so I'm going to go out on a limb since I couldn't find any official minimum requirements and say that you could run Notion comfortably on 256mb of RAM if you didn't intend on using Firefox, or LibreOffice but instead used much lighter software to replace them.

Notion is NOT for new GNU/Linux users, not even remotely. You barely touch the mouse when using Notion, 99% of it is keyboard controlled, and you should probably be comfortable with the terminal even though you don't need to use it, you'll probably find it easier TO use it.

However, if the idea of a tiling window manager like this interests you, Notion is definitely my favourite of the various ones out there I have tried. I love to use it when I have a LOT going on, and want to sit down and cram my work in. I actually found it perfect for while writing this article, while also working on some server related things!

What about you? What's your take on Notion? Have you ever used a tiling window manager before? Talk about your side, in the comments below and stay tuned for more window manager overviews to come!