According to a report by Windows Central, Microsoft appears to be working on a new feature that would bring tab support to all programs on Windows 10.

The feature, called Tabbed Shell, would introduce tab support to all programs on the operating system including Windows Store apps and legacy desktop programs.

Tabbed Shell is an operating system level feature which means that the functionality becomes available once it is released. Developers don't need to do anything to take advantage of it, as it works out of the box.

The feature -- according to the initial report -- brings tabs to the operating system that look similar to the ones in Microsoft Edge. Basically, it shows a tab bar on the title bar that you can use to switch between the open tabs of the program.

The only requirement, it seems, is that the app has to feature a title bar. Microsoft, according to the report, is working on API support as well to give UWP application developers more control over the feature.

Early reports indicate that the Tabbed Shell feature might cause bit of a problem in default form. Windows Central mentions that program windows might display multiple window controls, titles and icons, and that optimizations would do away with those for a better experience.

Microsoft does have ample time to test the functionality and work out quirks before it is released to Windows 10 Insiders or Windows 10 Stable. 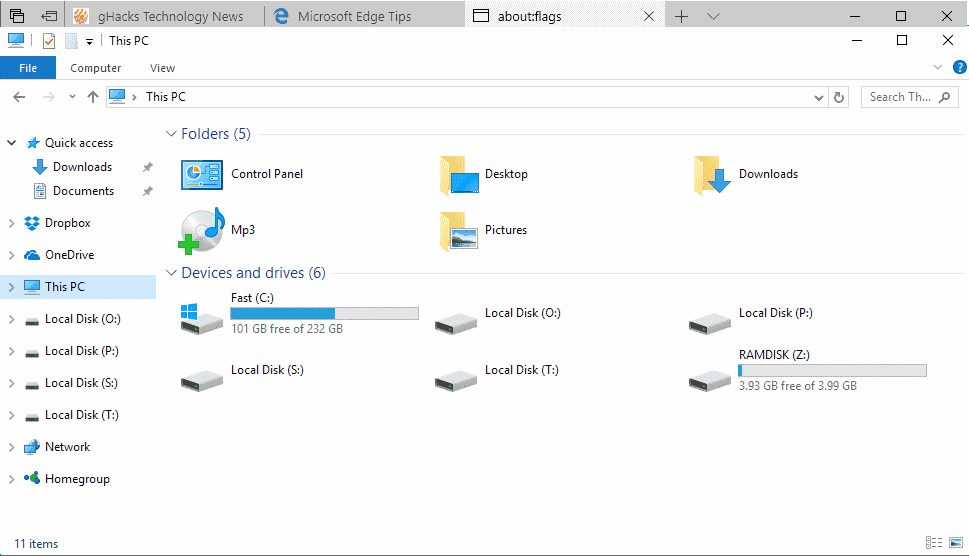 A small but vocal group of Windows users have requested support for tabs in Windows Explorer / File Explorer for years. Could the new Tabbed Shell feature finally bring tabs to File Explorer and other Windows programs?

Most Windows users who requested tab support probably use one of those programs already for that.

I'm not sure how tab support for any program would work out. It would probably make sense to display the tabbed interface only if a program has been opened multiple times on the system; a single tab in a window is as useless as it gets in terms of functionality.

Tabs certainly have their advantages, but Microsoft needs to make sure that multiple windows of the programs are still a possibility. If you want to do a side by side comparison for instance, then you need the ability to display two windows on the screen. This will probably work like it does in web browsers, so that drag and drop can be used to move tabs to a new program window.

Now You: What is your take on Tabbed Shell?

Article Name
Report: Microsoft working on tab support for Windows 10
Description
According to a report by Windows Central, Microsoft appears to be working on a new feature that would bring tab support to all programs on Windows 10.
Author
Martin Brinkmann
Publisher
Ghacks Technology News
Logo