The organization released builds of Servo for Linux and Mac in July 2016, and has added Windows to the list just now in April 2017.

Windows users may head over to the official Servo download page to grab the installer. All that is required then is to run the installer to install the Servo preview -- called Servo Tech Demo -- on a Windows machine.

Servo won't start automatically after installation. You find it under Servo Tech Demo in the Windows start menu.

A word of caution: This is a tech demo. This means that most of the functionality that you have come to rely on in web browsers is not implemented yet. 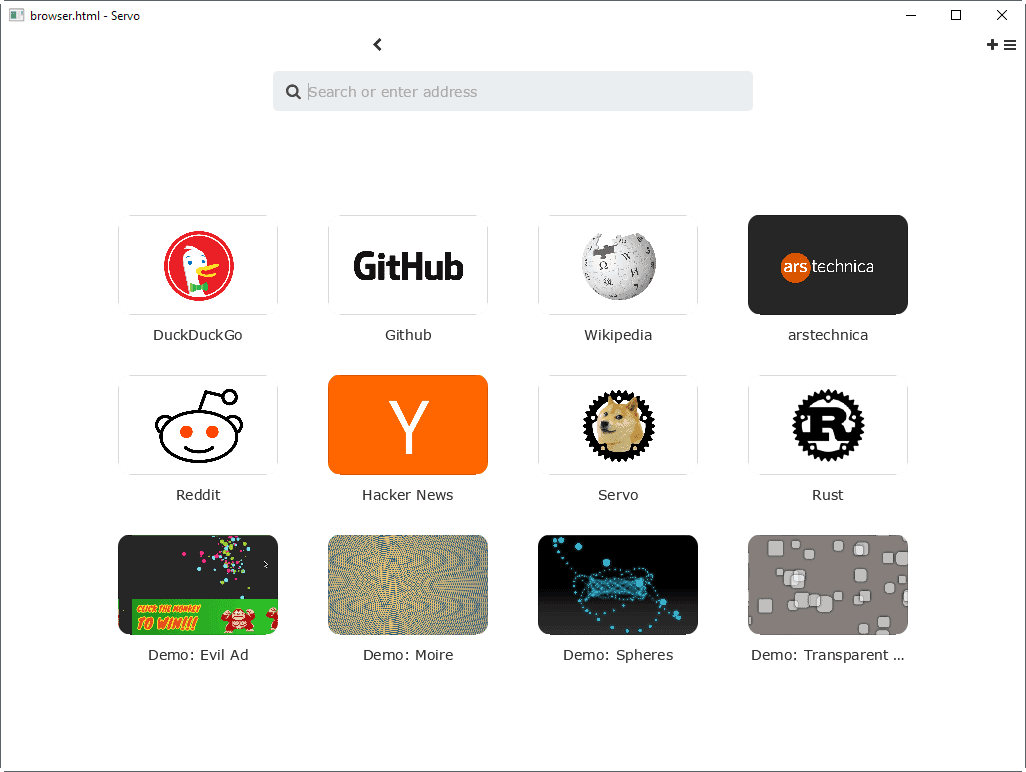 The Servo start page opens with a list of site and demo thumbnails that you can launch. While you can load any site on the Internet, you may notice that many won't render correctly.

Ghacks for instance loads, but style information appears to be missing. This is even the case for Ars Technica, a site linked on the Servo Tech Demo start page.

Anyway, the browser UI offers little in terms of options. While you can open multiple tabs, run searches or open sites, and navigate back and forth, that is pretty much all that you can do right now in the tech demo build that has been released.

Tabs are not displayed only when you click on the menu icon on the right side. You may open new tabs with a click on the plus icon, or by using the Ctrl-T keyboard shortcut.

There is no options menu, no menu bar, and things like add-on support, themes, or anything else that you expect from a modern browser.

Again, this is understandable as it is pre-alpha software as Mozilla notes on the Servo blog.

We encourage everyone on Windows to experiment with the nightly builds. This is pre-alpha software, so please file issues about anything that doesn’t work as expected!

Please don’t log into your bank with Servo just yet!

Servo testers who run into issues are encouraged to report those to the Servo team (on GitHub, not on Mozilla's website).

The Servo Developer preview loads quite fast, but that is somewhat expected if you consider that it is as light as it can get when compared to major browsers that are available today.

The release of the Servo Tech Demo for Windows marks an important step however for the team, as it covers all major desktop operating systems now.

Now You: What's your expectation in regards to Servo?