Update: Tim Nguyen, the guy who audited Tab Mix Plus is not a Mozilla employee.

Tab Mix Plus is a popular browser add-on for the Firefox web browser that adds many customization options to the tabbed browsing behavior of Firefox.

Among many other features, it enables you to display multiple tab rows, change tab styling, and link behavior.

Tab Mix Plus is a classic add-on that will stop working in its current form when Mozilla releases Firefox 57, as the organization plans to end support for classic add-ons for the most part at this point in time. 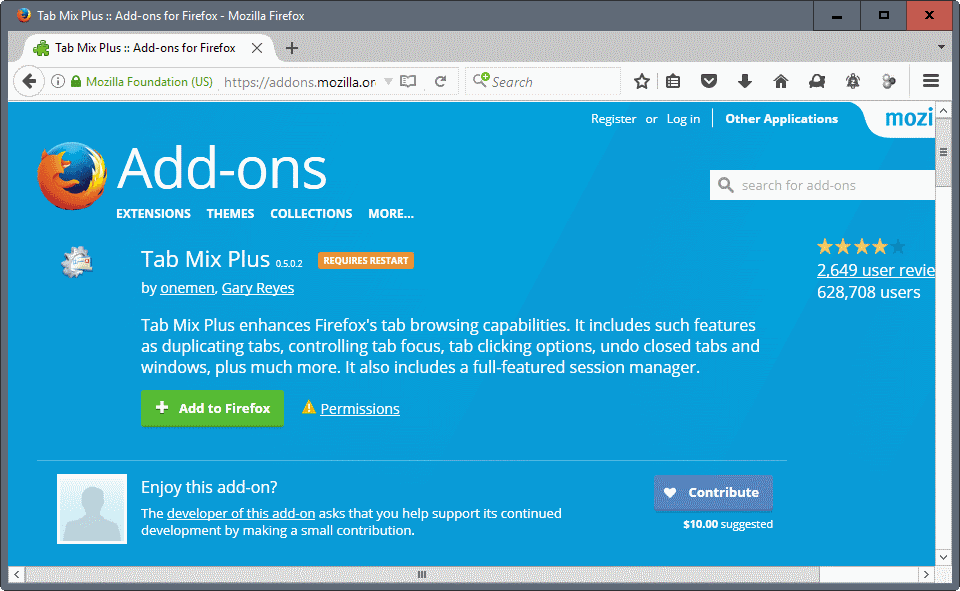 The add-on needs to be rewritten as a WebExtension for support for Firefox 57+. One issue that add-on developers face is that the development of WebExtension APIs is an ongoing process. This is especially problematic for developers who have created powerful add-ons such as Tab Mix Plus.

Mozilla audited the Firefox add-on Tab Mix Plus recently to find out which features are already implementable, and which are not yet supported.

The result is a mixed bag right now. While some features are already available through various WebExtension APIs, others are not.

Most link behavior, session management, and advanced settings are supported for instance, and as are most events.

Other features on the other hand are not supported. Some are already planned, but others would require the creation of new or improved APIs to make it happen.

WebExtensions do not support for instance options to show Tab Mix Plus' buttons on the tab bar, position changes of the tab bar, different tab bar styles, or display tabs in multiple rows in the browser window.

Mozilla notes that some of the features could be implemented in the feature by re-implementing the toolbar API.

Good news for users of Tab Mix Plus is that the author of the extension seems interested in creating a WebExtension version of Tab Mix Plus. He notes however on Bugzilla that he won't be able to do it alone, and that he needs help from Mozilla and contributors.

I need to develop Tab mix from the start in order to make it Webextension.

I don't think that i can do it alone without mentoring from Mozilla and more code contributes from the community.

Mozilla announced a support program recently for add-on developers to help them port their add-ons to WebExtensions.

The WebExtension APIs are under active development right now, but if Tab Mix Plus would be ported right now, only some of its functionality would be available to Firefox users. That's probably better than none at all, but still disappointing from a user perspective.

The situation may improve over time, as Mozilla plans to extend WebExtension APIs.

Now You: What's your plan if some of your must-have add-ons won't be available when the WebExtensions exclusive version of Firefox launches?