December 2016 Stats: Windows 10 up, IE down, Edge not going anywhere

The latest usage share reports are in and they don't give Microsoft many reasons to rejoice when it comes to the company's core products Windows 10, Internet Explorer and Microsoft Edge.

Windows 10 performed considerably well this month, considering that the operating system's usage share rise stopped dead in its tracks when the free for all offer expired.

It is only in this month that the operating system managed to gain a noticeable share, jumping up to 23.72% from 22.59%.

If you compare the December 2016 stats to those of January 2016, you will notice that Windows 10 doubled its usage share in that time.

While the usage share of all other versions of Windows fell in the year, the drops were not as dramatic as Microsoft may have hoped them to be.

Most users cling to their operating system and it seems unlikely that they will upgrade to Windows 10 in masses anytime soon. 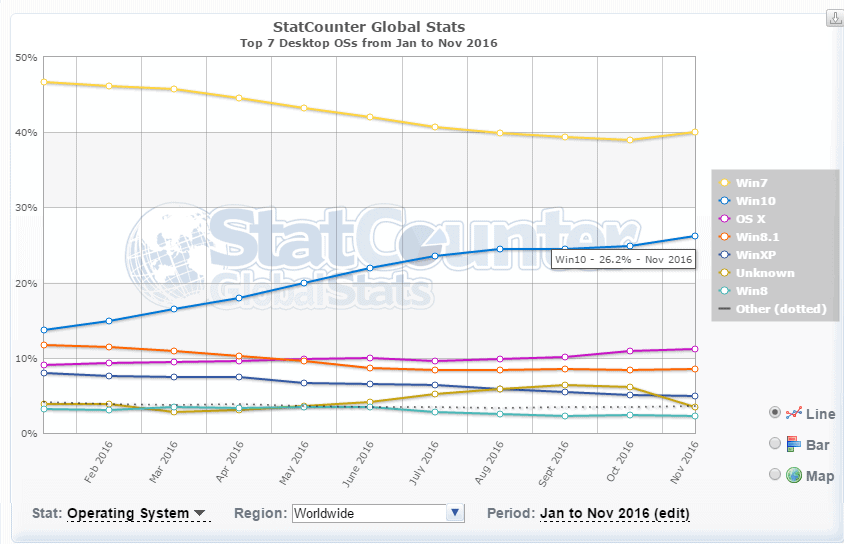 To be fair, this looks a lot like a recording issue more than anything else as the number of unknown devices dropped by more than 1% in November while all other operating system versions remained fairly stable.

The January to December comparison paints the same picture that Net Market Share revealed. Windows 10 managed to nearly double its usage share in 2016, while all other versions of Windows fell a bit but not extremely.

The browser's usage share halved in that time. While Microsoft may have hoped that its Edge browser would gain the bulk of the share, that is apparently not the case.

Edge continues to go nowhere this year. While it managed to jump from 3.07% to 5.21% this year, this is nothing to brag about considering that Microsoft is pushing the browser quite aggressively on Windows 10.

The past six months have been extremely telling, with Edge rising a mere 0.12% in that time.

StatCounter's statistics tell a different story this time. The service recorded Internet Explorer's usage share at 15.95% in January 2016, and at 9.66% in November 2016. That's not even half of what Net Market Share recorded for the browser.

It is too early to tell if Windows 10 will make sizeable gains in the coming months, or if things will slow down to a crawl again. It is almost certain that the coming months won't change a thing for Internet Explorer's downfall, and Edge's continuance in the position it is in right now.

Now You: Where do you think will Windows 10, Edge and Internet Explorer be at the end of 2017?

Article Name
December 2016 Stats: Windows 10 up, IE down, Edge not going anywhere
Description
The latest usage share reports are in and they don't give Microsoft a lot of reasons to rejoice when it comes to the company's core products Windows 10, Internet Explorer and Microsoft Edge.
Author
Martin Brinkmann
Publisher
Ghacks Technology News
Logo