In a little bit over a week, Microsoft ends the free upgrade offer for eligible Windows 7 and 8.1 systems.

While some may still get the upgrade for free after July 29, 2016, the majority of Windows devices aren't.

It is likely that Microsoft servers will experience a rush of late-comers who want to grab the free upgrade before it expires. After all, if it turns out to be not to a user's liking, it is easy enough to roll back to a previous version of Windows.

It is up to you to use built-in functionality or system backups for the purpose.

Anyway, it appears that Microsoft has started a last ditch effort to get users to upgrade to Windows 10.

The company updated the patch KB 3035583 once more which means that anyone who just hid the patch on their device will see it offered again by Windows Update.

The most recent attempt, spotted by InfoWorld's Woody Leonhard, has a clear decline option. Probably the biggest change apart from that is the big countdown that counts down to the end of the free upgrade period.

Microsoft's timing is a bit off. Considering that it is likely that quite a few users have waited to the end of the upgrade period to upgrade their devices to Windows 10, they will have to download and run two major operating system upgrades in a short period of time.

Microsoft announced that it will release the Anniversary Update for Windows 10 on August 2. While the company mentioned that the update will roll out gradually to users, it means that users who upgrade their devices to Windows 10 right now will have another major update at hand as early as four days after upgrading their systems to Windows 10.

This means two large downloads, and two lengthy installations of Windows shortly after one another.

If Microsoft would have extended the free period by a week, or two, it could have offered the Anniversary Update version of Windows 10 to late-comers effectively halving the data download and upgrade time for them.

As it stands, the upgrade period is not extended. This means that users who plan to upgrade in the last couple of days will have some downloading and installing to do over a short period of time.

Now You: Are you looking forward to the end of the free upgrade period / Anniversary Update? 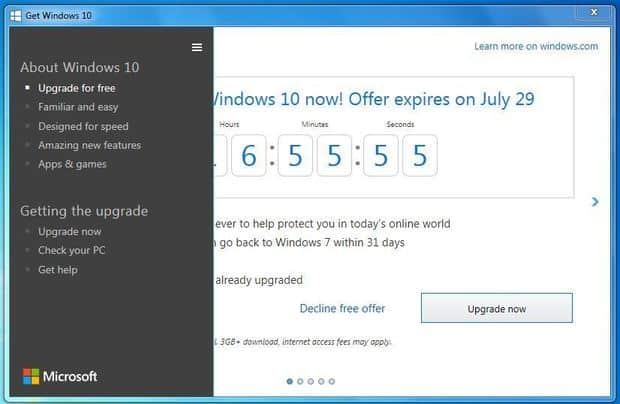 Martin Brinkmann is a journalist from Germany who founded Ghacks Technology News Back in 2005. He is passionate about all things tech and knows the Internet and computers like the back of his hand. You can follow Martin on Facebook or Twitter
View all posts by Martin Brinkmann →
Previous Post: « Microsoft shames power hungry programs on Windows 10
Next Post: Microsoft in hot water over Windows 10 privacy in France »