Microsoft revealed during the Build 2016 Conference it held recently some of the improvements and feature additions that would come to Windows 10 as part of the operating system's Anniversary Update.

The start menu was mentioned by Microsoft explicitly as a feature that needed improvement. While it is still several months until all Windows 10 users will get the new Start Menu of Windows 10, today's Windows 10 update for Windows Insiders reveals what Microsoft has planned already (it is a massive update for desktop systems that introduce Windows Ink, Cortana improvements and a lot more).

Microsoft revived the start menu from the dead in Windows 10 but changed it as well so that it resembles something that is best described as a mix of the Windows 7 Start Menu with the Windows 8 Start Screen.

The start menu is divided into a left part that lists often used and recent apps and programs, and core system options such as settings or the power options, and a right part that displays tiles in various formats. 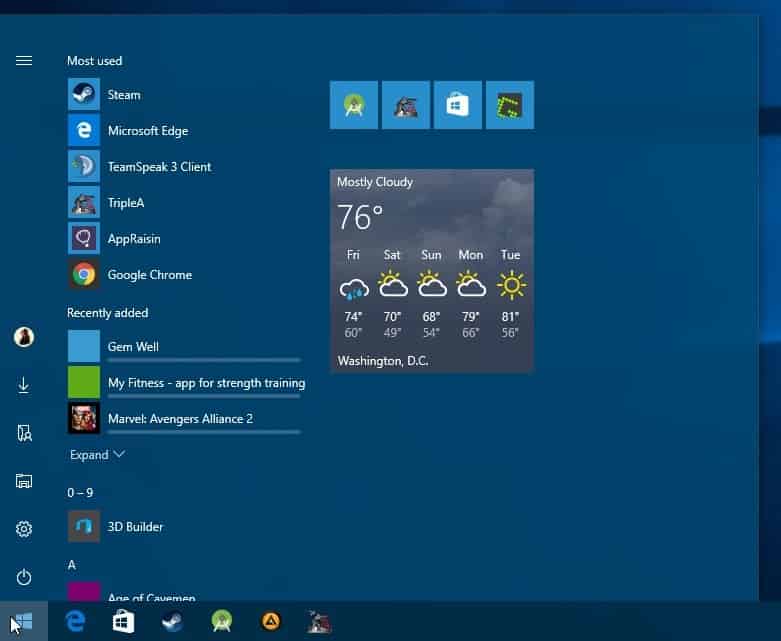 Please note that things may still change as Insider Builds are preview builds that don't necessarily reflect the final product.

The overall layout of the start menu has not changed all that much but you will notice that it is divided into three areas now instead of two.

Microsoft added the system links such as power or File Explorer to a small bar on the left. These are accessible all the time now which they were not previously, for instance when you select the all apps option of the start menu.

The options are displayed as icons only though with information about individual items displayed when you hover over them. This may take some getting used to time before you know which icon does what there. You may click on the menu icon at the top however to display icons and titles.

The second feature addition is that Microsoft removed the "all apps" page that you needed to click on to browse all start menu items.

These are added below the "most used" and "recently added" listings in the middle column of the new start menu.

Basically, what it enables you to do is browse all start menu entries without affecting the system links of the left column or the tiles on the right.

It would be better, in my opinion, if Microsoft would provide users with customization options there to make the listing more useful.

Also, and I may be the only one who wants this, I'd like to see an option to turn tiles into text links.

Microsoft plans to release the updated Start Menu with the Anniversary Update that is likely coming out at the end of July or beginning of August.

Now You: What's your take on the changes?

Previous Post: « Windows needs an option to remove apps from your library
Next Post: Bypass login after Windows 10 Updates »