Most modern web browsers support spell checking as you type. The feature is helpful in preventing typos and spelling mistakes, and while it is limited to words found in dictionaries, it is useful nevertheless as these cover most words and ship with options to add words and phrases to them.

Spell checking has its difficulties when it comes to bi-lingual users. While I type in English most of the time for instance, I type in German at other times. Most browsers support options to switch between languages, if they don't support auto-detection of languages.

Google's web browser Chrome did so until the update to version 47 in December 2015. If you relied on the spell-checking selection menu to switch between languages, you may have noticed already that it is no longer available.

Google removed it from Chrome and implemented an option instead that supports multi-language spell checking at the same time.

You need to add languages to Chrome first to ensure that spell checking is enabled for all languages. 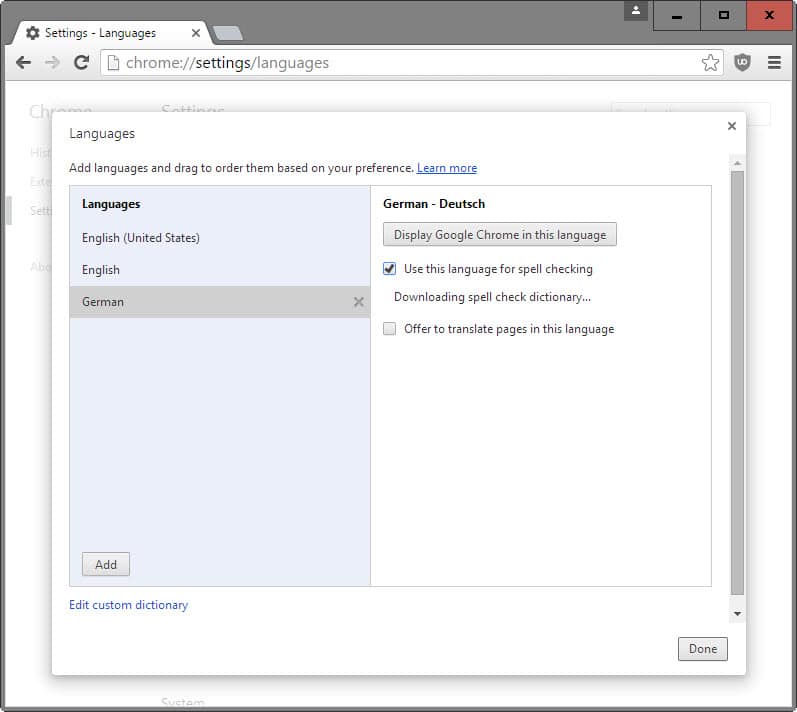 The easiest way to do that is the following:

The feature looks good on paper but users are already complaining on Google's official product forum that it does not work correctly.

The main issue here is that Chrome may detect the wrong input language when users are typing, especially if words are identical in two or more languages. Chrome may suggest words to be correct even though that may not be the case if it detects the wrong language. It may also lead to situations where Chrome may suggest corrections that are not right in the language the user is using.

This can be the case for Spanish and English, technical documents written in French that use lots of English words, or likely in many other use cases.

No option is available right now to restore the old spell checking functionality in the Chrome browser.

Now You: Do you use spell checking in your browser of choice?