One of the most controversial features of Microsoft's Windows 10 operating system is its automatic update feature. Especially Home users are affected as updates are pushed out via Windows Update automatically to those systems while Pro and Enterprise users get options to delay the deployment or even block it completely.

Microsoft's main intention in regards to automatic updates is to ensure that Windows 10 machines are protected from attacks that exploit security vulnerabilities that the company patched in the past already.

Yesterday's botched security update for Windows 10 highlights the dangers of pushing updates to user systems automatically. While the computer won't explode after installation, users may notice that some functions are not working properly anymore but crashing Explorer instead.

What makes this problematic is that users cannot block (hide) updates currently when they get deployed on the system. While it is possible to remove updates again, the automatic nature of the update process will install it again in the future.

Microsoft released a tool for Windows 10 Insider Preview systems that adds the functionality back to Windows 10. It remains to be seen if it can be used on regular systems as well, but since it runs fine on Windows 10 Build 10240, it is likely that users may run it on non-Insider systems as well.

Here is how this works:

Download and run the "Show or hide updates" troubleshooter from the Microsoft Support Knowledgebase page. You may run it right after you have downloaded it. 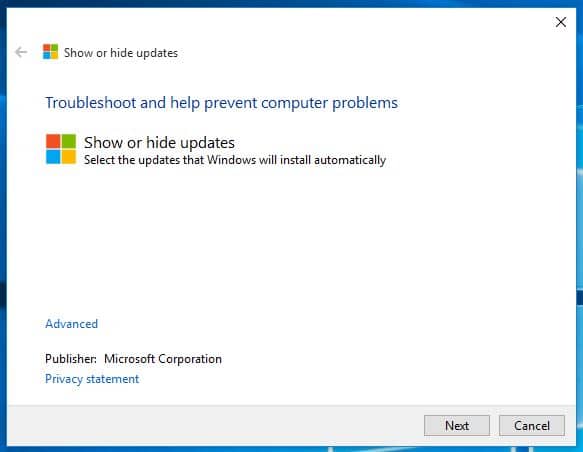 Make sure you hit the advanced link on the first page that comes up and disable the option to "apply repairs automatically".

Click on next and wait for the tool to scan for updates. It displays two options on the next page: 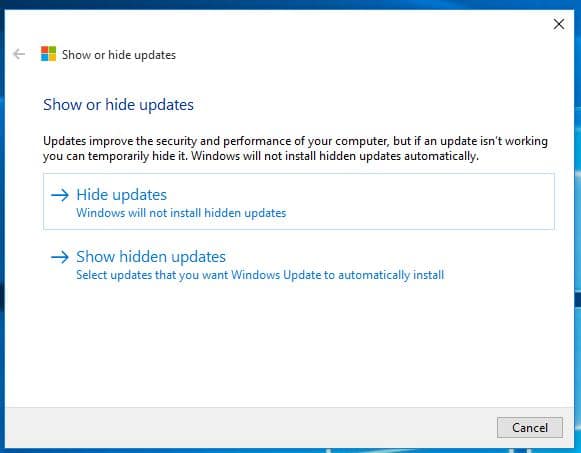 To block one or multiple updates from being installed on the machine, select hide updates on the page.

Note: Windows displays only updates on the next page that are not installed already. This means that you need to remove an update through other means before you can hide (block) it with the help of this tool.

A selection menu appears that you use to block updates from being installed automatically.

The other option, "show hidden updates" enables you to unblock updates so that they are automatically installed by Windows Update afterwards.

The process is not as comfortable as the old process of hiding updates via the Windows Update control panel update. First, you need to know that such a tool exists which is probably the biggest issue right now. Then, you need to run it whenever you want to block or unblock updates, something which you could do using the same control panel applet that installed the updates previously.

Still, the tool ensures that updates can be blocked that are not desired. (via Ed Bott/Zdnet)

Martin Brinkmann is a journalist from Germany who founded Ghacks Technology News Back in 2005. He is passionate about all things tech and knows the Internet and computers like the back of his hand. You can follow Martin on Facebook or Twitter
View all posts by Martin Brinkmann →
Previous Post: « KB3074681 highlights why mandatory updates on Windows 10 are not a good idea
Next Post: What is Wi-Fi Sense and should you be using it? »