How to enable Developer Mode in Windows 10 to sideload apps

If you are running a recent version of the Windows 10 Insider Preview, build 10122 or greater to be precise, then you may have noticed a new "For developers" option in the operating system's settings.

This configuration option allows you to enable modes intended for development, for instance to test applications that you are developing on a live system to ensure that they work properly.

Development mode options are not entirely new as they have been available in previous builds as well.

The core difference is however that they had to be enabled using the Group Policy Editor in builds prior to 10122 while they are now accessible in a comfortable way through the settings menu. 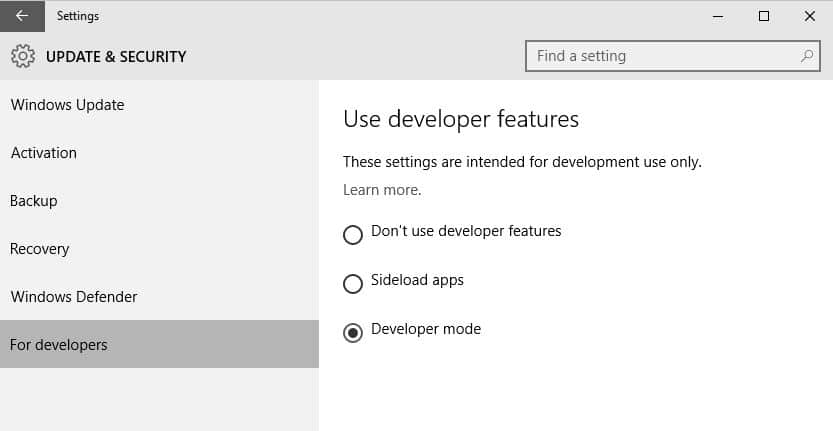 To enable the new Developer features, do the following on build 10122 or greater:

Sideload apps -- Install apps from other sources you trust, like your workplace

The main difference between the options is that "sideload apps" is limited to loading apps from sources other than Windows Store, while developer mode goes beyond sideloading applications.

The new method improves the implementation on Windows 8.x significantly and should make life a lot easier for developers, for instance by requiring no registration to get started or registering phones.

Please note that you do get a prompt to enable Developer Mode automatically when you create a Windows 8.1 or Windows 10 app in Visual Studio on a windows 10 device. It more or less tells you where to enable the option but does not do that for you. 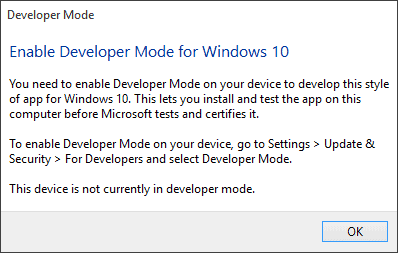 It does highlight the current status of the device though which may be useful at times.

The options are intended for developers who developer applications for Windows 10 (or Windows 8.1), but they can be used by home users as well to sideload apps.

Sideloading refers to installing and running applications from sources that are not official. So, instead of downloading and installing apps from Windows Store, you can use the sideload feature to install apps from a third-party, for instance in a company network that has no access to Windows Store or from a developer who has not published an app on Windows Store.

Sideloading apps on a device running Windows 10 is not without dangers. Microsoft notes that users should only sideload apps from trusted developers as they have not been certified by the Windows Store and may therefore include code that violates Store policies.

Additional information about the new "for developers" option in Windows 10 is available on MSDN.

Martin Brinkmann is a journalist from Germany who founded Ghacks Technology News Back in 2005. He is passionate about all things tech and knows the Internet and computers like the back of his hand. You can follow Martin on Facebook or Twitter
View all posts by Martin Brinkmann →
Previous Post: « How Windows 10's Quick Access feature differs from Favorites
Next Post: A first look at Windows Firewall Notifier 2 »