Microsoft published several Windows 10 preview builds of its upcoming operating system that give interested users a preview of things to come, Microsoft much needed feedback and companies options to test software and services in the new environment.

These builds are not final and improved builds are published by Microsoft regularly which update older builds to the newest version when downloaded.

Beta software, and the tech previews of Windows 10 are that technically, expire especially when the software is commercial in nature.

This is true for all Windows 10 builds that Microsoft has released so far. A support engineer published expiration dates of builds on the Microsoft Answers website.

If you look at the expiration dates you will notice that some builds expire at the end of April. All builds go through three expiry stages that begin with two weeks of expiration notifications and another two weeks of automatic reboots every three hours before the computer will stop booting completely.

The message displayed by the system:

This build of Windows has expired, so your PC will restart every few hours and will eventually fail to start. Go online for more information.

The license expires approximately two weeks after expiration warnings are displayed on the PC running a build of the operating system that is about to expire. The two week grace period afterwards has been designed to give users enough time to upgrade the system to a newer build.

Builds 9841, 9860 and 9879 are already in that grace period. These builds will expire in seven days which means that PCs still running them won't boot into the operating system anymore.

Microsoft notes that a different computer needs to be used to download installation media for the PC running the expired version of Windows 10.

Windows users who are stuck on older builds, because Windows Update won't download or install newer builds for whatever reason, are encouraged to download the preview ISO from Microsoft's website and use it to upgrade the system to a newer build.

The next three builds that Microsoft released, builds 9923, 10041 and 10049 will expire October 1, 2015.   Expiration notifications are shown two weeks before and systems running those builds become inoperable on October 15, 2015.

It is interesting to note that these builds will expire after the official release of the Windows 10 operating system. 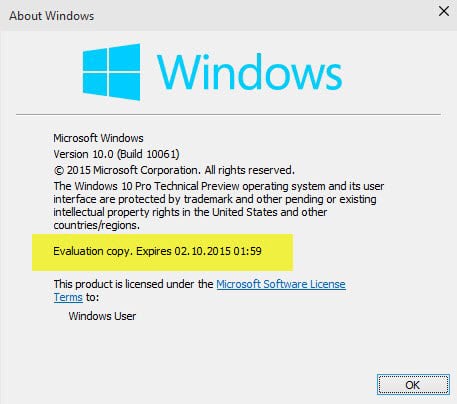 Do the following to look up the expiration date of your Windows version:

Expiration dates block users from running preview builds forever and enforce upgrades to newer versions at the same time which help in the feedback process as bugs and issues may have been resolved in newer versions of the operating system.

Windows 10 will be a free upgrade in the first year if a legitimate license is provided.