Privdog is Superfish all over again - gHacks Tech News
ghacks.net

Privdog is Superfish all over again

Privdog is a privacy protection software that is available as a standalone product for the Google Chrome Microsoft Internet Explorer and Mozilla Firefox web browser and bundled with select Comodo products including Comodo Dragon and Internet Security.

According to Comodo's website it ships with the company's Internet browser and Internet Security products. The company did not bundle the standalone version of PrivDog with its products though.

A user on Hacker News noted that the Superfish test would return a hit even though Superfish itself was not installed on the system. After some analysis it appeared that the privacy software Privdog was the culprit in this case.

Note: I installed the latest version of Comodo Dragon on a test system and it shipped with Privdog. It did not install a root certificate on the other hand. 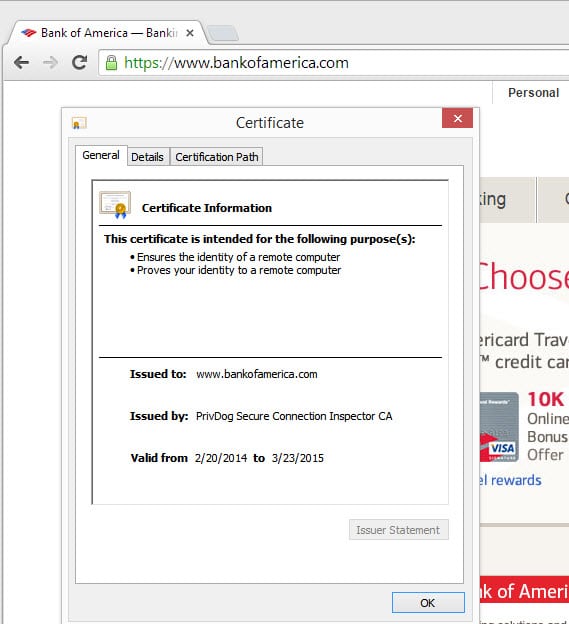 Privdog has been designed to block certain trackers and advertisement from showing up while you browse the Internet. It blocks all advertisement that is not hosted directly on the domain you are visiting and replaces it with AdTrustMedia advertisement.

What's worse however is the fact that it installs a certificate on the system as well. While it does not share the same key on all installations, it has an arguably even bigger flaw than that: it intercepts all certificates and replaces them with one signed by its own root key.

All in this regard means valid and invalid certificates which in turn means that the browser you are using accepts any certificate regardless of whether it is valid or not.

That's bad on many levels and means basically that you are not secure while Privdog's certificate is installed on the system.

It is therefore highly suggested to remove the software from the system and make sure that its root certificate is gone too after the removal. If it is not, you need to remove it manually from your system which you can do in the following way:

In case you are wondering what the connection between Comodo and PrivDog is: the CEO and founder of Comodo seems to be behind Privdog as well.

So why is this Superfish all over again? Both products add a root certificate to the user's computer and both make the user's computer insecure in the process and are used to earn revenue for the parent company. While they don't work the same, Privdog is arguably worse in terms of security than Superfish, they have been designed for the same purpose.

Article Name
Privdog is Superfish all over again
Description
Find out why Privdog is as bad as Superfish when it comes to Internet Security and what you should do about it.
Author
Martin Brinkmann
Advertisement

Martin Brinkmann is a journalist from Germany who founded Ghacks Technology News Back in 2005. He is passionate about all things tech and knows the Internet and computers like the back of his hand. You can follow Martin on Facebook or Twitter
View all posts by Martin Brinkmann →
Previous Post: « The future of technology and entertainment is frightening
Next Post: Apple tops operating system, Microsoft application vulnerability chart »